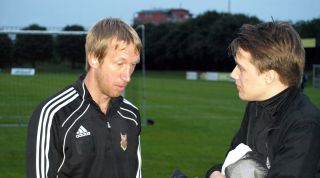 Against all expectations, though, this wasn’t just another North African trump. Instead it was one of world football’s most unlikely investment tales.

Understandably, Gaddafi wasn’t everyone’s cup of tea, but despite his many faults – his penchant for terrorism and iron-fisted quashing of insurrections, to name but two – you could never accuse him of not loving a kickaround.

His son, Al-Saadi, even managed to blag games in Serie A for Perugia and Udinese. These are, though, different and difficult times in a country adapting to a new regime after 42 years under a crackpot.

Central to the plans of the country’s new powerbrokers is improving the footballing fortunes of the 2017 African Cup of Nations hosts. And that's where Graham Potter’s Ostersunds SK side come in.

You may or may not have heard of this particular Englishman abroad, but the name will ring a bell with fans of Birmingham, Stoke, West Brom, Southampton, Macclesfield and York City, who were just six of the 11 clubs he played for during a career that spanned from 1992 to 2005.

His last job back home was with Leeds Metropolitan University. Now, he’s preparing to take on what the Ostersunds chairman has described as “the biggest football-related deal” in the history of the Swedish game.

According to reports, Ostersund will receive over half a billion crowns (£47 million to you and I) as part of a five-year agreement that will see Libya’s best young players travel to Sweden to play football and study English, IT, sports management and sports administration.

By anyone’s standards that’s a tidy sum – but when you’re a club in the hard-up Swedish second tier it’s enough to make your eyes water. Not that Potter is smashing down the chairman’s door to demand a cut of the bounty.

“I have to admit that I didn’t think Gadaffi’s fall would have any real impact on my managerial career,” he tells FourFourTwo. “It’s a small world and it’s a strange world. That’s what makes football exciting, I guess.

“These things happen in all parts of the world and then trickle back to you. It’s going to be interesting to see how it unfolds.  I don’t know too much Arabic, that’s for sure. I’m still trying to learn Swedish!

“From a financial perspective I’m not sure what it means yet, really. That’s the one for the chairman. I think the media have got hold of some numbers and have been spraying them around but when you’re bringing in 60 people from anywhere there are costs associated with that. I haven’t been promised a massive transfer budget, put it that way.”

It’s hard to imagine cost being much of an issue for a country with such bountiful reserves of oil, but Potter himself has been mining something of a rich seam since leaving these shores back in 2011.

Such has been his success at Ostersund that he’s even being compared locally to two of English football’s most famous exports to the country – Bob Houghton and current England boss Roy Hodgson.

Despite having had little success as players in their home country, 'Bob and Roy’, as they’re still affectionately known, revolutionised Swedish football in the mid-to-late 1970s at Malmo and Halmstad respectively.

“Those two are obviously legends over here and rightly so,” says Potter. “The influence they’ve had in football in Sweden is really, really big and it’s a little bit embarrassing to be mentioned in the same breath as either of them. Sweden have had a huge English influence, there’s a real connection.”

The same certainly can’t be said of the ties between England and Libya, which have been strained to breaking point over the past 30 years.

There’s clearly a limit to what Potter can do to fix that, but if Libya enjoy a successful Africa Cup of Nations in front of their own fans in three years’ time, then the new regime in Tripoli could owe him a huge debt of gratitude.

“Club representatives have been out there this week to select the first batch of kids to come over,” he says.  "For us, at the moment, it’s an educational experience for the 60 odd kids to come across from Libya to play football and also study English.

“The infrastructure isn’t as well-established there as it is in Europe. The more you travel around the world, the more you realise the incredible power that football has. These boys will all have football ability and as a country they’re building towards the Africa Cup of Nations in 2017.

“We’re really looking to play a part in developing their youth and football infrastructure. Who knows what will happen in the future but at the moment we see it as a way of helping football in Libya grow and thrive.

“It’s well-documented that there has been a massive transition in the country and they need to stabalise themselves and move forward. The oil obviously helps them, the resources are certainly there. Having the focus of the African Nations gives them a short-term goal too.

Whatever happens in snowbound Scandinavia, it’s a situation that Potter could never have imagined being involved in when he retired from football and threw himself into the education game.

“I left England working in the higher education sector, which for me was a great place to learn about coaching and managing people,” says Potter. “I was dealing with experts from other sports and other fields, it was a great learning experience. Whether I would have stayed in that sector I’m not sure.

“From a football perspective it would have been difficult for me to get into football, certainly on a management level because, rightly so, chairmen want to know about your experience.

“I suppose the simple answer is that I don’t know whether I'd be working in football if I had stayed in England.

"That’s part of the reason I took this opportunity, I felt it was a good chance to have a football management role and make a difference. That’s how it was sold to me really, as a project.

After two promotions in three years, Potter – who played once for England U21s and now possesses a master’s degree in leadership and emotional intelligence – will be hoping he can provide some additional magic to propel Ostersund into the Swedish top flight, something that’s eminently possible with the club’s new Libyan backing.

Like Gaddafi under canvas all those years ago, Potter could be about to let rip.