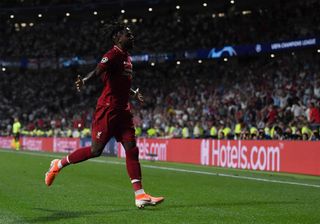 Divock Origi has had an underwhelming five years on Merseyside. The 24-year-old was farmed out on loan to Lille and Wolfsburg and may still be sold in the summer. Yet in the waning minutes of the Champions League final against Tottenham Hotspur in the Wanda Metropolitano in Madrid, the Belgian entered the pantheon of Anfield legends. The striker scored an 87th-minute goal to seal Liverpool’s 2-0 victory and win the competition for the sixth time.

The two goals bookended a disappointing game. The first came within two minutes of the start from a ludicrous penalty. Moussa Sissoko was directing traffic in his own area when Sadio Mane flicked the ball at his waving arm. Mo Salah, redeeming himself from last year’s disastrous final in Kiev when he left the game tearful and injured in the first half of the 3-1 defeat by Real Madrid, was never going to miss from the spot but it was a bizarre start to the game. Sissoko was awful. He wasn’t the only one. Few players other than Origi emerged from the game with their reputation enhanced.

The old clichés about English football always mention passion, power and pace. These qualities were missing in a subdued game. Both teams looked jaded. The three-week break between the end of the season and European football’s showpiece match was too long. Liverpool, so compelling in their duel with Manchester City in the Premier League, rarely showed the dynamic edge that makes them unpredictable and thrilling. Spurs were flat. The semi-finals were a marvellous advert for the English game. This was dull, brainless and relentlessly pointless.

Harry Kane, rushed back from injury, was nowhere near his best. Christian Eriksen never looked like shaking Liverpool out of their comfort zone. Dele Alli and Son Heung-min never got into the game.

In truth, Jurgen Klopp’s team were not much better. There was no crispness in their passing. Too often, the ball found a white shirt. They did the ugly things better than Tottenham – breaking up play and pressing their opponents – but it was not the sort of thing that lifts the crowd or a global television audience.

The atmosphere in the stadium did not match the mood in city centre earlier in the day. Madrid buzzed all afternoon, but once the sun went down the fiesta spirit evaporated. If the players spent all their energy over a long campaign, the fans lost some of their edge after a long, hot afternoon and evening of drinking and singing.

Tottenham finally put some pressure on Liverpool in the closing minutes and Alisson Becker had to make a number of saves as Mauricio Pochettino’s team poured forward. Spurs fans began to believe that they could get an equaliser but, from a corner at the other end, Joel Matip helped the ball on to Origi, who fired a low shot into the corner. The striker has been an afterthought for Klopp but has scored important goals this season against Everton, Barcelona and now in the Champions League final. The fans chanted his name at the final whistle with the gusto the Kop reserves for their idols.

He will now be remembered alongside the greats whenever the Champions League is mentioned.