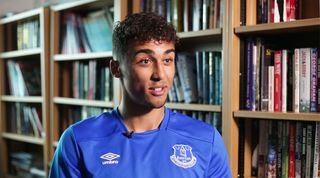 Everton youngster Dominic Calvert-Lewin says he is learning the art of being a Premier League striker from one of the division’s all-time greats - Wayne Rooney.

The former Sheffield United forward has played an integral role in Everton’s recent upturn in results, providing assists, winning penalties and finding the back of the net.

Since Romelu Lukaku’s departure to Manchester United in the summer, the 20-year-old has formed an impressive partnership with Rooney, scoring six goals across 28 appearances in all competitions. Rooney himself is enjoying revival this season, with 10 goals in 23 appearances for his boyhood club.

Calvert-Lewin says he was a little starstruck by the five-time Premier League winner when he returned to Goodison Park as part of the Lukaku deal, but as their relationship has developed, Rooney has been a wellspring of knowledge - sharing priceless pointers about the intricacies of spearheading the attack.

“I was over the moon when I heard he was coming in and I’d be lying if I didn’t say I was a bit in awe when he first came in, as any young footballer would be,” he tells FFT. “He’s helped me quite a lot actually and you need all the help you can get as a young centre-forward in the Premier League.

“He’s taught me a lot about positioning and body shape that has made the game easier.”

Everton looked to be heading towards a relegation battle after a dreadful start to the season but since Sam Allardyce has arrived as manager, the team has climbed to 10th in the Premier League table, having won 10 points in four games.

Calvert-Lewin has been a key figure in the Toffees’ resurgance. He won a penalty during Everton’s 4-0 win over West Ham, his clever back-heel set-up Gylfi Sigurdsson to open the scoring against Huddersfield before he added the second in the 2-0 win, then he won the penalty that allowed Rooney to level from the spot against Liverpool at Anfield. He was involved in the winning goal against Newcastle in Everton's last match.

He’ll be hoping to continue this good run of form on Monday night when Everton host Swansea.