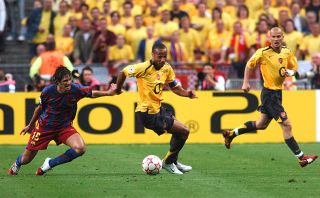 Barcelona’s 2006 Champions League-winning midfielder Edmilson has told FourFourTwo just how close he came to joining Arsenal at the turn of the century.

The Brazilian was in Barça’s midfield as they downed the Gunners in Paris, four years on from helping his country win the 2002 World Cup in Japan and South Korea.

Edmilson initially made his name in Europe with Lyon, where he won three straight Ligue 1 titles from 2000-01 – but it could have easily been north London where his career took him to.

In one episode, it did: in February 2001, he scored a last-minute equaliser at Highbury in the Champions League's second group stage, before Arsenal went on to advance at their French foes' expense on head-to-head.

But it could have been a permanent residence.

“I had everything agreed for a move to Arsenal, but ended up at Lyon,” he explains in the July 2020 issue of FFT – a Brazil special out in shops now and available to order online with free delivery.

“Arsene Wenger was friends with Jose Fuentes, who’d been working for Peugeot in Brazil and became my agent.

“My name was mentioned, then Wenger came to Brazil to watch me play and we spoke. He told me he was looking for a tall, dynamic midfielder who was versatile enough to play in more than one position.

“We agreed on terms, but unfortunately I couldn’t meet the criteria to get a work permit. I hadn’t played enough times for Brazil and didn’t have the Italian passport I have now. It was hard to take, because I wanted a move to Europe, but then Lyon came and I was happy to join them.

“What I can say is that Wenger showed me his ideas, and I can understand how he changed the English game forever. The Premier League is the best in the world, and he played a huge role in that.”

QUIZ! Can you name the European clubs that Brazil's 2002 World Cup side played for?