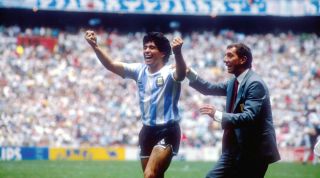 In the dressing room of the Azteca, minutes after winning the game's ultimate prize, the emotion of the achievement finally got the better of Diego Maradona. Waving a towel above his head, Argentina's World Cup-winning captain led the players in a euphoric rendition of a terrace chant aimed at the critics back home who had doubted the squad, their style of play, their coach and their captain. "Argentina's going to be champions," he sang.

"We dedicate this to you all, even the f***ing whore who gave birth to you.'"If lifting the World Cup on that sweltering Mexican afternoon was a moment of glorious vindication for a group of players who had been written off back home, for their controversial captain it was stone-cold proof of his football greatness.

That it came on the same world stage that had witnessed his failure in the flourish of a red card four years earlier only added to the satisfaction.

A bunker mentality had helped the team pull together through. It had been a long and rocky road to glory, beginning in late 1982 with the appointment of Dr Carlos Salvador Bilardo as team manager.

As a player, Bilardo built his reputation with the roughhousing Estudiantes team of the late-1960s, and as national coach his tactics and team selection – a stark contrast to the flair of his predecessor Cesar Menotti – proved unpopular, even causing outrage at the highest levels of government.

"Some of our players had zero approval from fans, journalists and from football leaders," says defender Jose Luis Brown.

'"Bilardo was the only one who trusted us. We had to leave a month early for the World Cup, because rumours had it that the secretary for sport would have Bilardo fired. So Bilardo arranged everything in just two days and we went to Norway, from Norway to Israel, and on to Switzerland. We got to Mexico a month before the World Cup and we had already been around Europe for some 20 days."

"From the outset Bilardo knew what he wanted and communicated his plans directly to the players, visiting his overseas stars such as Jorge Valdano at Real Madrid and Jorge Burruchaga at Nantes. He would play them videos and borrow their club team-mates to rehearse set-pieces."

"That's the origin of the story 'Burruchaga crosses in Nantes and Valdano heads it in Madrid'," explains Bilardo. Breaking with Argentine football traditions he evolved a revolutionary 3-5-2 formation, with a sweeper in front of two central markers and five across the midfield. He wanted his team to play with the European discipline he so admired, dominating the centre of the park and allowing Maradona the freedom that was so important to his game.

'"Bilardo saw football in a way we were not used to in Argentina – tactical, the way you were supposed to live, the way you were expected to think,'" says midfielder Jorge Burruchaga. '"As a coach, first of all he thinks about the 'nil', making sure no goals are scored against you."

"The team was based on a very solid architecture and, in the midst, a genius who was granted the privilege of freedom," explains striker Jorge Valdano, former sporting director at Real Madrid.

"The influence of Maradona was so significant it seemed to spread to the entire team, yet the team was very structured from a tactical viewpoint, and each one of us had very precise obligations."

The voice of command

As Bilardo geared up for the start of Argentina's qualification campaign in May 1985, Maradona had not played for his country since his red card at Spain 82. The accepted wisdom was that his record-breaking transfer to Barcelona had been a failure, but his time there had been dogged by serious injury and illness. A move to Napoli in 1984 had revitalised his career and Bilardo was certain he knew how to handle the psychological frailties of this uncoachable player.

Even when Maradona had been injured at Barcelona, Bilardo had still jetted off to Europe to spend time with his star.

"People said, 'Maradona failed in the national team, why do you trust him?', but I trusted him because he was going to be the best player at the World Cup. It was my time to coach and I trusted Maradona. I believed that with him, if he was really fit, we could tip the balance in games.

"Says Brown: "Diego woke up before everybody else, he took the lead in our practice sessions, and when we were all gone, he would stay to practice. He set an example in all respects and that's why we were proud to have him as captain. We had great players in that side but when you have the best player in the world, and he is going through the best stage of his career, we revolved around him. There is no doubt about that in my mind."

Argentina were considered contenders, but not favourites, yet the team grew in confidence, cruising through the early stages with Maradona displaying flashes of brilliance. It was in the quarter-final against England, however, that Maradona would cement his legend and earn his notoriety.

When a reckless lobbed backpass from Steve Hodge saw Maradona jump with Peter Shilton, even the photographers failed to capture the ball deflecting into the net off Maradona's raised fist. In the wake of the Falklands War, pick-pocketing the English in such a way was a satisfying experience for every Argentine. It was a perfect example of what they called viveza, taking the shortcut to success.

"There isn't a single Argentine willing to say to the referee, 'Look, it wasn't a goal'," explains Valdano.

"We've been brought up to celebrate cheekiness and cunning. Perhaps many of the social and economic problems in Argentina would have been solved if we could understand that what we call viveza is in other countries regarded as crime. Viveza is deeply rooted in the Argentine psyche, and when you get away with it, you celebrate."

At the time Maradona coyly referred to the goal as being, "a little of the hand of God, and a little of the head of Maradona", but this moment of supreme impishness only served to inspire a fantastic solo strike six minutes later.

The same afternoon, back in their hotel the squad watched Belgium beat Spain after extra-time and penalties, setting up what they viewed as an easy semi-final."As soon as it was over, we went into the corridor to shout and hug each other," says Valdano. "All these expressions of joy showed we had much more respect for Spain than for Belgium."

Three days later, Belgium were defeated by another sublime Maradona performance that included two breathtaking second-half strikes to rival his wonder goal against England. "Of course without Diego we would not have won with such brilliancy," says Valdano. "Those goals raised football to a higher level and confirmed his condition as a football artist."

The Argentines now feared no one. As they waited to face West Germany in the World Cup final, the unusual pre-match composure was captured in a dressing room photograph that midfielder Ricardo Giusti would show to Valdano many years later."Clausen, Giusti, Maradona and myself were there, and it looks like a picture taken before going to mass, not of people in competition.

It shows four players completely relaxed, waiting for a game of no particular significance, with no signs of tension. We realised we were going to play the most important game in our lives, but were waiting for it to arrive with a lot of calm. We had no doubt we would win.

"The air of composure was only shattered by a moment of sheer theatrics from Maradona, who voiced a loud plea for help to his mother.According to Valdano, this outburst was an eccentric act of reassurance. "It was his way of saying, 'even I'm scared, it's normal'."

Maradona was the outstanding star of the tournament, but Bilardo had calculated that in the final the West Germans would try to mark him out of the game. It was now up to rest of the players to prove they weren't simply a one-man team.

The final would be Maradona's quietest game, shadowed as he was throughout by Lothar Matthaus, yet in a magnificent all-round team performance he still earned the free-kick from which Brown headed the opener, started the move that created the second for Valdano and provided the through ball that set up Burruchaga for the winner.

The game had seen Bilardo's grand plan in operation, but for the coach the only sour note was that his well-drilled defence had relaxed at 2-0 to allow the Germans to score twice from corner kicks, a move he thought he owned. "I stood up and kicked a bucket of water," he recalls."I was not happy afterwards. The players said, 'But Carlos, we are World Champions'.

I said, 'Yes, but they scored twice from corners'."For all the column inches devoted to Maradona, the triumph was as much a testament to the talents of Carlos Bilardo, vilified in his own country just weeks earlier.

A banner in the crowd read, 'Sorry, Bilardo. Thank you', while in due course his 3-5-2 formation would be taken up around the world. But even at the point of his greatest triumph, this obsessive student of the game was unable to stop hatching plans."We were in the shower singing," says Brown, "and he came to tell us, 'Just remember we've got a World Cup to defend in 1990'.

Only a half hour earlier we had won the World Cup and he was already thinking about the next one.

"While the players continued to celebrate, their mastermind was addressing the press with Dr Raul Alfonsin, the President of Argentina. When he returned he discovered his squad had already departed. "I found myself alone in a huge car park," said Bilardo. "I started walking in the direction of where we were staying until an official car stopped and I asked how to get back.

"When he reached the hotel, Bilardo locked himself away to contemplate the achievement. There was no outward show of emotion, but he was certainly pleased to have proved his critics wrong. "Winning a World Cup is reaching the top of the world," he explains. "As they say, 'You can argue, but when the man shows up with the World Cup, you shut your mouth'."