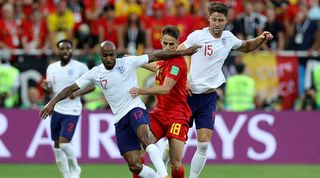 Huh. We thought that international friendlies were saved for pre-tournament rather than midway through. This game had all the intensity of two retirees playing chess in the park. Understandable given that so little was riding on the game. Yet on a night when England lost, it was the men in possession of the shirt for games one and two who were the Three Lions' biggest winners.

Some were suggesting that Marcus Rashford should be starting ahead of Raheem Sterling or that Eric Dier might deserve a place alongside (or instead of) Jordan Henderson. Rashford was lively and involved, but there was a frustrating lack of end product  – he should have done far better when put through on goal just after the hour. Dier just didn’t show the midfield control Henderson had done against admittedly limited opposition.

Overall, the players who had auditions for a starting spot in this game did not further their cause. Those sitting on the bench, in possession of a starting berth, were sitting even more comfortably by the end.

Southgate must now face the grumbles

It’s been all good PR for England’s manager in the World Cup so far after two enjoyable, high-octane wins. Yet by making eight changes before this game and resting his first-team players, Southgate risked accusations that England would lose momentum as a result.

This 1-0 defeat – thanks to a superb goal from Adnan Januzaj – will make those voices grow a little louder. Southgate will have to face questions that would not have come up if England had won or drawn; that he’s drained England of their impetus. FourFourTwo’s thoughts are that – if England can beat Colombia – he will look wise in retrospect. The games come thick, hot and fast if you go deep in a World Cup.

All will be forgotten if England win their next game. If they fail to, this match could be looked at retrospectively as a strategic error from England’s manager to give away the feelgood factor of those first two wins.

Cahill shows maturity among the kids

There weren’t a great many individual positives from this game from an England perspective, but Gary Cahill’s calm goalline clearance after an early skirmish in the England box where Jordan Pickford had the ball kicked from his grasp summed up why he’s in the squad. Cahill hasn’t had his best season for Chelsea, but he finished it well with an FA Cup win – and he’s here because he’s a safe pair of hands; a Champions League winner with plenty of big-match experience.

England’s defence looked a little shaky again – but Cahill was at no way at fault for a goal only Danny Rose or keeper Pickford could really have prevented. He may not start the next game, but he reminded his manager that he’s a secure and solid back-up if needed in a high-pressure situation.

Jekyll and Hyde Colombia will be a test

It’s difficult to say how good Colombia are, even after watching them three times in this World Cup. In their first game, they were seriously impeded by being down to 10 men and a goal down inside three minutes in losing to Japan. In walloping a poor Poland 3-0, they looked back to their 2014 vintage. Yet in sneaking past Senegal, they were disappointing, albeit hampered by the early loss of James Rodriguez to injury.

So what are Colombia? The dangerous attacking unit inspired by Juan Fernando Quintero, Juan Cuadrado and – if fit – that man James. Or are they just a slightly poorer, discount version of the 2014 Colombia that have come through an intriguing but fairly low-quality Group H.

We shall see. England should fancy their chances against Colombia’s shaky defence. The thing is, manager Jose Pekerman may be saying exactly the same thing about England based on their first three games.

Batshuayi sews up celebration of the tournament.

Oh, Michy. After missing a hat-trick of chances against Tunisia (before finally scoring near the end), the Chelsea striker didn’t help his reputation when he celebrated Januzaj’s goal by grabbing the ball and gleefully lashing it towards the goal... only to see it bounce back off the post and hit him right in the side of the head. It’s not quite Marco Tardelli’s scream, but Russia 2018 may have seen its iconic celebration early on.

Elsewhere for Belgium, his team-mate Mousa Dembele controlled the game, showing England's midfield how it is done. Unlike the Three Lions on the day, he has given his manager food for thought about a starting spot.