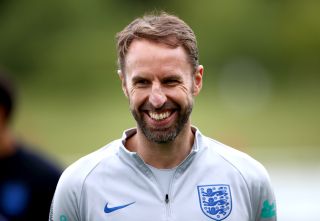 England rarely field three debutants in a competitive game, and certainly not as starters, but let’s use a raft of absentees to construct an inexperienced and imaginary team. Conor Coady is at the heart of a back three, providing a constant commentary that is audible to all in a largely deserted stadium. Kalvin Phillips is the deepest midfielder, the ‘Yorkshire Pirlo’ exported to Iceland. Ainsley Maitland-Niles is charging up and down the left flank, charged with replicating his FA Cup semi-final and final and Community Shield excellence on the international stage.

The common denominators extend beyond their shared number of caps. For much of their footballing lives, each saw himself as a box-to-box midfielder and, had they all remained one, they probably would not have attracted Gareth Southgate’s attention. Each has been reinvented by a club manager, reimagined in a way that makes their club coaches feel visionary. England may be shaped by a Portuguese, an Argentinian and a Spaniard.

Nuno Espirito Santo saw Coady’s passing and leadership and pictured him flanked by stoppers. Marcelo Bielsa surprised Phillips by telling him he saw him as a defensive midfielder. Mikel Arteta had a leftfield idea for Maitland-Niles, whose preference for midfield was well known, who had been used at right-back in the past but who surely would not have gained international recognition ahead of Trent Alexander-Arnold, Kieran Trippier, Kyle Walker and Aaron Wan-Bissaka. England have not stockpiled such options on the left, however, so Arteta’s unexpected use of Maitland-Niles has had a fringe benefit.

The theory that the Premier League damages the national team has been floated many a time over the past decades. Diminishing percentages of English players appearing in the division are often cited in evidence. And yet Southgate’s selection has showed the merits of importing elite coaches.

There has long been the notion there is talent in English football, if only it is afforded the opportunity. For all the ever-present talk of money, it is notable each foreign manager has been resourceful enough to examine the attributes of a player he inherited and skilful enough to convert him. In each case, the footballers have been taught the positioning a new role requires. Maitland-Niles has only had a handful of outings as a wing-back but, in three years under Nuno and two under Bielsa, Coady and Phillips have rarely been caught out of position.

England’s fortunes under foreign managers have been mixed. Now they are benefiting from them, but under the auspices of a man born in Watford and brought up in Crawley. An international manager has far less time to mould his players. Some of the world’s finest coaches ply their trade in England. It is doubly rational to take advantage of their work.

One of Southgate’s more astute decisions has been to borrow liberally from others’ ideas; almost exclusively, from foreigners’ plans. The back three he used to such effect in the World Cup was influenced by Antonio Conte, who was in turn copied by some of his Premier League peers so that plenty of England’s players had a grounding in the shape. The switch to 4-3-3 in the autumn of 2018 drew much from Jurgen Klopp’s tactics.

Jordan Henderson is emblematic. The Liverpool captain anchored England’s midfield in the World Cup, after two years spent at the base of the Anfield trio. Now he has been reinvented as a No. 8 for club and country.

It is entirely logical giving someone duties he already performs on a weekly basis. Yet it first takes someone else to have the vision to look at the raw materials of a player, wonder where they can best be used and fashion them into a different footballer. Phillips, Coady and Maitland-Niles could all have been good but essentially unexceptional No. 8s. After their new incarnations, they might soon be internationals.