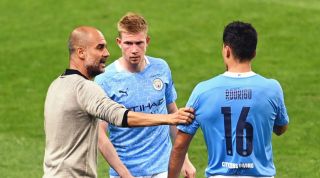 Often, a manager’s greatest strength is also their greatest weakness. It’s poetic that the trait that should elevate a man above the clouds is often the one that sends him crashing back down to Earth.

Arsene Wenger, for example, built legends on the foundations of faith. His trust in ordinary individuals was what made him great: yet it was too much trust in too many ordinary individuals that signalled a downfall at Arsenal. Jose Mourinho, on the other end of the spectrum, forged teams from pure resilience. He relied on strength of character, siege mentality. It’s often, though, been this same friction and fire that has led to revolts against him; like a mad king who inspired his own subjects to overthrow him at Chelsea and Manchester United.

For a while, we doubted that Pep Guardiola even had a weakness. Since the Catalan genius swaggered into the foreground, he has been more than a football manager. He’s been a philosopher; his football is often seen as a rulebook that a club should follow.

Now we know, though. Pep Guardiola’s weakness is also his greatest strength. He overthinks, way, way too much.

Don't get it twisted – it’s a good thing that he overthinks more than the average boss. He always challenges himself, his players, his systems; he’s innovated beyond any other manager of his age. Who else would have considered using Lionel Messi as a false nine, in the cauldron of a Clasico? Who would’ve thought of using Philipp Lahm as the nucleus of Bayern Munich’s midfield, while dropping Xabi Alonso and David Alaba into the back four for their ball distribution? And which other manager could possibly have won a Premier League by shaping David Silva and Kevin De Bruyne into central midfielders?

Yet when push comes to shove, Guardiola’s overthinking is what has scuppered Manchester City, time and time again in his four seasons in the north-west. Never was it more plainly obvious than Saturday night, as City lined up with a back three to match Lyon, operating with two free-roaming forwards in Raheem Sterling and Gabriel Jesus.

You can talk about the ridiculous decision to allow Lyon’s second goal to stand: City failed to create enough. That’s the bottom line and it’s down to Pep trying too hard to outwit Rudi Garcia.

Defensive mix-ups, VAR drama, missed sitters!Just another night of the Champions League drama we've come to expect 🍿All of the action as Lyon stunned Man City in Lisbon 😲#Club2020 pic.twitter.com/6Xd8VA3bmQAugust 16, 2020

The same was true two years ago in the Champions League quarter-finals. Up against Liverpool, Guardiola packed out his midfield to try and out-muscle Jurgen Klopp’s, bringing in Ilkay Gundogan and leaving a runner like Raheem Sterling on the bench. City were bodied and had lost the tie within half an hour; for the return game, Pep went for a Bielsa-esque 3-3-1-3. Again, he lost. In trying to be something that they weren’t, City lost what made them thrilling.

City paid far too much respect to Tottenham Hotspur last season too, and last week, Pep spoke openly about the quality that Lyon had on offer. It’s almost as if every big loss causes a scar; Guardiola usually only tends to overthink how he can beat someone if they’ve delivered a heavy blow to him in the past. Klopp has been a nemesis since the pair fought in the Bundesliga; Pochettino was the first manager to beat him at City.

Leicester City, Crystal Palace and now Lyon have all dealt blows to Guardiola. In return, he’s adapted his City side when he’s faced them again, and done so at the expense of City’s ruthlessness.

Often, the best answer is also the simplest. Having more natural midfielders to rely on in European competition is such a simple – and boring – solution to help City, but one that they would benefit from. Just look at how much better they looked when they relied on Gundogan dictating tempo against Real Madrid, rather than De Bruyne or Silva.

He doesn’t invert his wide-men, either – despite them failing to penetrate European giants season after season. He has a squad of quiet, studious types keen to follow orders, rather than big personalities to force play on the pitch.

He would rather play with the 2-3-2-3 attacking shape, than stagger his midfield – despite how much success it brought him in the 4-0 against Liverpool a few weeks ago. A number of his ideals at City seem at odds with what made his teams great: why doesn’t he go with has worked in the past, rather than try to outsmart what’s about to happen?

The answer is that Pep Guardiola is still trying to revolutionise – even mere mortals can see that. He is still trying to out-think the rest of football and win his way. Until he learns how not to overthink – how to trust in what made his football great a little more, rather than trying to evolve it further – City won’t be lifting the Champions League. It’s starting to hold this side back.