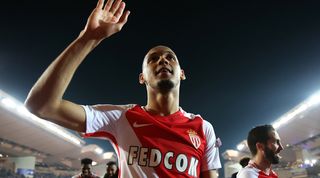 Fabinho spent five seasons at Monaco from 2013 after initially joining on loan from Fluminense, and won Ligue 1 in 2016/17 alongside several stars he will call league rivals next season.

The Brazilian is particularly aware of the ease with which Manchester City’s Silva and Mendy have settled in the Premier League, and is relishing the prospect of facing them as a Liverpool player.

Speaking in the August 2018 issue of FourFourTwo, out now, Fabinho says: “We have a great relationship – a lot of affection for each other.

“I just hope to adapt to the Premier League as quickly as they did. Bernardo and Mendy won the league title in their first season, which is a brilliant achievement.

“We’re friends, but it’s a completely different story on the pitch. We now play on different sides, and if I have to tackle them, they’d better be ready for it.

“I’ve already told Bernardo that if he ever tries to do some tricks against me, he’ll definitely regret it!”

Liverpool have not won a domestic league title since 1990, and narrowly missed out on the Champions League last season as their journey to the final in Kiev ended in a 3-1 defeat to Real Madrid.

Fabinho, however, is hopeful of European redemption for the Reds next season – and further trophies in the coming years.

“For me, I want to settle down as quickly as possible and then help my team-mates to become an even more competitive side,” he tells FFT.

“If I can say at the end of the season that I played a part in making Liverpool better, I’ll be happy. For a club like Liverpool, a good season means trophies.”

“Perhaps we can win the Champions League title; we were so close to winning it last season. I’m optimistic about the future and I’m looking forward to winning a lot of titles with Liverpool.”

Read the full interview with Fabinho in the August 2018 issue of FourFourTwo, in which we reveal David Beckham’s turbulent quest to be football’s first superstar owner, and look back to 1998 when he came Public Enemy No.1 following his red card at the World Cup. Also, we find out what Arsenal fans can expect from the four men filling Arsene Wenger’s sizeable shoes, go One-on-One with former Sweden star Tomas Brolin, recall the bonkers the story of Graeme Souness at Rangers, visit the London-based firm fighting match-fixing around the world, and hail some of the worst football teams ever. Subscribe to FFT today!