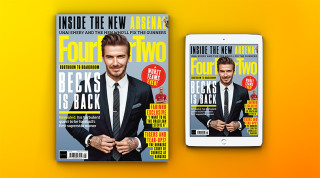 The trick when putting together a FFT cover story is to try to predict who and what you, the reader, will want to know about roughly three months down the line. Obviously this is easier said than done, with the myriad problems that can derail a cover story in that time. This is doubly difficult when the issue in question is set to come out midway through a World Cup – like this one.

Not only do we not know how England will be getting on as we come out, the World Cup has a way of putting all transfer activity on hold until Florentino Perez buys the tournament’s star player and the dust settles on all subsequent transfer activity. So we can’t even look past the goings-on in Russia until next month. Luckily – and not for the first time – David Beckham has come to the rescue...

What Becks did next

His quest to become football’s first superstar owner has been plagued by problems, but that’s never stopped him before. This is the story of his turbulent journey from bootroom to boardroom.

How Becks bounced back

In June 1998, one petulant flick of a right foot changed David Beckham’s life. His red card against Argentina in Saint-Etienne sparked outrage across England. Well, everywhere but Old Trafford...

The fight against match-fixing

A Swiss company is now at the vanguard of the battle to end match-fixing. FFT visited the nerve centre of a secretive operation proving that if you want to expose corruption, just follow the money.

Liverpool certainly found their rhythm last season, but will adding more of a Samba beat to the mix help the Merseysiders get back to No.1? Fabinho tells FFT why he couldn't turn the Reds down.

Photography project Goal Click aims to capture the impact football has on the lives of fans and players by sending disposable cameras to every country. The results are gloriously imperfect...

Forget Donald Trump and Kim Jong-un’s handshake, the quest to broker peace between North and South Korea has been kick-started by the United Koreans in Japan at the CONIFA World Cup.

‘Wenger Out’ may have become a popular refrain at Arsenal towards the end of his reign, but replacing the all-powerful Arsene won’t be easy. It may even take four men to fill his shoes.

Stoke and West Brom may have suffered a turgid 2017/18 campaign, but compared to this hapless bunch of record-breaking goal shippers and firework-hurling car torchers, they’re Brazil 1970.

Thatcher-supporting Graeme Souness was too ‘English’ for Rangers fans despite his success, and his attempts to transform the club offer a stark lesson to the latest Liverpool legend in the hot seat...

Ex-Sweden, Leeds and Crystal Palace midfielder Tomas Brolin answers your questions, such as: just how good were Parma? Does he regret joining Leeds? And did he really hit an elk with his car?

In our fun-packed front section, Mark Clattenburg answers some silly questions, Lucas Leiva tells us about life at Lazio and his love for Liverpool, and Alan Shearer recalls his thunderbastard against Everton. Plus Lothar Matthaus explains what it’s like to play in a World Cup final and lift the trophy.

In 1930, inaugural world champions Uruguay paraded a cup that has barely been seen since. Why? No one knows, so FFT began its own investigation. We also learn about the birth of the bicycle kick, and hear how North Korea left a lasting impression on Middlesbrough during the summer of 1966.

Former Liverpool and England marksman Michael Owen talks to FourFourTwo Performance about how to create the perfect goalscorer. We also find out how altitude training is helping the Premier League’s elite players, and why a glass of red a day keeps Cristiano Ronaldo at the top of his game. Plus we get taught a pilates routine that will strengthen our core ahead of pre-season training.

Got your copy of the new FourFourTwo? Tweet us @FourFourTwo using #MyFFT