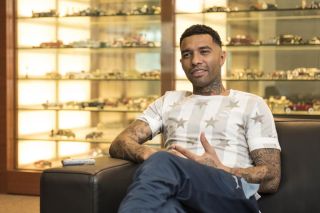 As part of an in-depth interview with new Tampines Rovers signing Jermaine Pennant, one of the questions FourFourTwo posed was: what advice would he give to his 16-year-old self, if given the chance?

“Stay away from women,” was his initial response, delivered with a hearty laugh, before going on to state he would advise the teenager to have a good attitude, be professional and work hard in training.

It was a refreshingly honest response from a footballer who knows he doesn’t have a huge amount of football left, and yes, one who probably should have achieved more given his natural talent.

Yet, while he does confess to having some regrets – and Pennant’s colourful past is well documented – he is also proud of his achievements.

Excelling in a Champions League final, being heralded at clubs the size of Liverpool and Arsenal, and continuing a career now into its 19th year is certainly nothing to scoff at.

Following FFT’s interview with Pennant, many people wanted to know what he was like. Almost without exception, the expectation was he would have come across as difficult or displayed a poor attitude.

That could not have been further from the truth.

Personable, patient – downright likable even – while still showing flashes of the larrikin that has been subdued over time, Pennant has undoubtedly matured, this interview falling just a few days after his 33rd birthday.

He is aware what is at stake in Singapore, a country so removed from the highs of Merseyside derbies and FA Cup finals. There is a significant opportunity for Pennant in this South-East Asian republic – if he can play his cards right.

“I’m not sure who contacted who first or how it happened, but I was told there was an opportunity to come to Singapore,” Pennant explains. “They told me the Tampines chairman (Krishna Ramachandra) is a massive Liverpool fan and was very keen for me to come, and was I interested? I just said ‘yes, why not’.

“Obviously coming here I knew it was more than just playing football. It was to help the league and bring more to Singapore football.

“It was a bigger opportunity than just signing for a club. Knowing all that information I thought it would be a good opportunity for myself as well.”

From the moment he was linked with a trial at Tampines, he became the face of the competition. Before he pulled on one of the Stags’ shirts, let alone signed a contract, he dominated headlines across this diminutive, football-loving country.

He has heard of the wild expectations that have accompanied his arrival.

“Everyone’s saying can I revive the S.League,” he says with another big grin, but he understands many of those floating that possibility actually mean it in all sincerity.

Football has undoubtedly fallen on hard times in Singapore.

There are the odd highs, such as the battling, unexpected 0-0 draw with Asian powers Japan in a World Cup qualifier last June, but for the most part Singaporeans tend to have a cynical attitude towards their progress and standing in the world game.

That permeates down into the local competition, which is often the recipient of more scorn, combined with an undercurrent of hope that it can be revived and recapture past glories.

That’s where Pennant can play a role. Before he has played a game of any significance, he has already been labelled the biggest signing in S.League history.

That is in some ways an indictment on the competition itself, considering the calibre of players that have graced pitches in nearby countries such as Australia and Thailand.

But it isn’t a tag Pennant is shying away from.

“It’s great,” he declares. “Any positive feedback is good; it’s good for morale and for your confidence.

“Now I know how Messi and Ronaldo feel! No, no, but it’s great to be acknowledged and appreciated. I’ve just got to repay that when I’m on the field and also off the field.”

Therein lies a key to why some were initially sceptical about Pennant’s ability to make an impact in Singapore. That off-field reputation remains a constant bedfellow, whether he likes it or not.

Read on to learn about Jermaine's battles with the law and the British press, plus his thoughts on Singapore

A brief prison sentence for a drink driving offence, the subsequent electronic tag he had to wear in a game, partying with glamour models, repeated incidents of missing or being late to training – it paints a picture of a loose cannon who struggled to deal with the fame and fortune that landed at his talented feet.

There was the chrome Aston Martin. “I sold that two or three years ago,” he continued. “They were good times. I was young and just enjoying it.“

Then there’s the infamous story of the car he left at a Spanish train station and promptly forgot he owned, leaving it there for months according to the British press, which took great delight in it.

“I’m so rich I forgot my Porsche,” screamed one of the headlines – but Pennant was happy to clarify that story.

“It wasn’t even a story. The media just spun it into a story,” he says. “It was deadline day and I had to fly to England to sign for Stoke on loan.

“I had about four hours to get from Zaragoza to Madrid to Manchester. I drove to the station in Zaragoza and went to Madrid by train, which was the quickest way, got my flight and signed the papers on time.

“I was in England sorting out my accommodation, getting things ready, and didn’t have time to go back.

“I phoned a friend and told him my car was at the station and asked him to pick it up for me. It was there for about four weeks.

“Next thing I know it gets out in the press and it turns out I’d left it there for six months and didn’t know anything about it. It’s crazy how they could turn it into something like that.”

He has clearly settled down and appears to be relishing his new environment in Singapore, a country with a population about two-thirds that of the 8.6 million people that call London home.

Pennant says he has adjusted to the heat, has been impressed by the technical ability of his new team-mates and enjoys the spicy food, although he admits “I can still feel it in my chest six hours later, so I wouldn’t have it before a game”.

Looking lean and every bit the professional athlete, Pennant says he has rarely had difficulty maintaining fitness throughout his long career.

When FFT points out he comfortably completed Singapore’s well-known 2.4 kilometre running test shortly after his arrival in the country, he quickly interjects with: “Twice! I had to do it twice!”

While he has some regrets, he is also content with what he has achieved, the only missing piece being a senior England cap.

“The season leading up to the 2007 Champions League Final was probably my best season for Liverpool and on that, I felt I deserved an England call-up," he says.

“But my misdemeanours from the past probably played a part. It was frustrating, but something I’ve got to live with.”

Surprised by the level of attention he has received so far in Singapore, Pennant is also happily embracing it.

“It’s good to have that effect,” he says. “It gives you a bit more added pressure, which makes me want to do well in every game I play.”

He's keen to move into coaching or the media when his playing days are over, but you get the impression that might not be for some time yet.

“For sure. I feel like I’m still 25,” he says. “I can move around the pitch freely and I’m still quick. I can’t see that changing any time soon.

“I’ve only just turned 33. There are easily three years left playing in Singapore or in Asia.

“I do see myself here for the long-term and if I play well and continue doing what I’m doing now, I’m sure Tampines will want to keep my services for next season.”