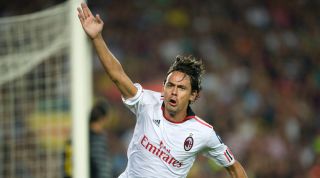 Milan are playing Barcelona at the Nou Camp in August 2010, and after 66 minutes are trailing 1-0 to David Villa's first goal for the Blaugrana. Clarence Seedorf picks up the ball after some scrappy play around the halfway line and launches a delectable long pass into the path of Inzaghi.

The striker – on this occasion not offside, where Sir Alex Ferguson once claimed the Italian was born – leaps high into the air and majestically volleys the ball home with his left foot. Woof!

"I was pleased with that goal even though it was in a friendly match, because it is not every day you score a goal like that at the Nou Camp," 'Super Pippo' tells FFT. "It was a great ball from Clarence but I had timed my run to make sure I was on the shoulder of their last player and that I was then able to catch it cleanly.

"It was certainly a goal I can smile about, seeing as it was in such a famous stadium and against the great opponents that we faced." No doubt. Barcelona fans are used to seeing great goals, but this was pretty unique. So the next time you're near a computer and someone accuses Mr Inzaghi of being an overrated goalhanger, show them this strike.

As Inzaghi himself says: "I know I am remembered as a player who scored most of his goals from close range, but I think that this goal shows I could score spectacular ones as well."