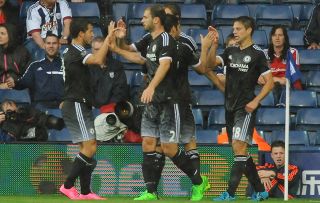 It took a couple of phone calls from his former team-mates to persuade the then Barcelona winger that London was a more viable option than Manchester. Louis van Gaal’s treatment of Victor Valdes convinced Pedro that he would be better off with a man that poked his old assistant manager in the eye than the Dutchman.

Another conversation with his good friend and former Camp Nou colleague Cesc Fabregas saw the European champion make the most surprising move of the summer. “He’s a great player, he’s got brilliant vision and he links up really well with the other attacking players. I know we work well together on the pitch so I can’t wait to play with him again,” Pedro asserted on his arrival.

The relationship was more than evident straight from the off, as they combined effectively in and around the opposing penalty area.

Then, in the 20th minute, the wideman ghosted past West Brom’s backline following a one-two with Eden Hazard in a manner that the Barca faithful had become accustomed to seeing. His ability to make penetrative runs and hold the shape of the team will be a vital asset to Chelsea’s attack. He already has an understanding with Diego Costa from the Spanish national side, while Hazard was able to drift into central areas knowing that both Willian and Pedro would fill in the gaps with their intellectual movement.

It was all going well for Terry until he received his marching orders in the 54th minute. Terry has been the subject of much speculation since his half-time withdrawl last weekend. Jose Mourinho's reasoning behind the change had some credence, but it still had political connotations at Stamford Bridge.

He lasted a little longer on this showing, with Mourinho deciding to drop Gary Cahill and partner Terry with Kurt Zouma. But it wasn’t his manager that was publicly hauling him off on this occasion, as that was left to referee Mark Clattenburg.

In the first half, Terry had dealt well with the threat posed by the West Brom attack, especially aerially. It was his spectacular leap to head clear a Chris Brunt corner that resulted in the counter-attack leading to Diego Costa’s goal and Chelsea’s second of the match. He’s still probably the best defender at the club, but if he gets turned or the ball is played over his head, there’s always a risk that he will make a mistake in a bid to make amends.

"Playing Saido [Berahino] and Rickie [Lambert], I think that left the midfield too open, going against the principles that I’ve always worked with and worked to," admitted Tony Pulis after he chose a 4-4-2 formation in the 3-0 defeat to Manchester City.

Berahino, currently subject of interest from Tottenham Hotspur, wasn’t included in the squad at The Hawthorns for Chelsea’s visit, while Lambert began from the bench. This meant that record signing Salomon Rondon made his first start for West Bromwich Albion as a sole striker.

The Venezuelan frontman is something of a hybrid of the two aforementioned forwards, more mobile than Lambert and stronger than Berahino. It didn’t stop the West Brom midfield from getting overrun, although that was mainly down to the away side's quality.

Rondon led the line well against the champions and was a constant menace for his opposing defenders. It was his speculative overhead kick, rescuing a lost cause, that enabled James Morrison to pull one back for the hosts, while he was also on the receiving end of Terry’s tackle for the sending-off.

Fabregas looked assured when Chelsea had their full complement of players on the pitch alongside Nemanja Matic, but the true test of the midfielder will be in the matches against sides hoping to stake a claim for the top four. With all due respect to West Brom, they are unlikely to be competing for a Champions League place this season. Fabregas was able to roam into more dangerous positions on the pitch, safe in the knowledge that it was doubtful the Baggies would take advantage when in the transitional phase.

The Spaniard could also play balls into awkward zones from deep. He's far from the hopeless tackler that many make him out to be and he can press at a high intensity, although he isn't tactically disciplined enough to play close to his own goal in the big matches. On those occasions, he can't be trusted to play alongside one other in the centre of midfield and should be utilised in a No.10 role. Fabregas would do less damage to his own side defensively by featuring further from his goal.

Claudio Yacob was left out of the starting XI on the first weekend of the season, but was brought on at half-time. With a lack of general midfield enforcers in the Premier League, Yacob is excellent at protecting the back four. It wasn’t the most conclusive performance from the Argentine, as Chelsea scored three times, but without the midfield battler it could have been more. His tenacious tackling and excellent reading of the game enables him to command the area in front of the defence with expertise. He made two important blocks and won three out of six attempted tackles, although the two times he didn’t manage to win the ball was when he was in the attacking third of the pitch. When he did have the ball at his feet in the final third, he was cool and controlled, misplacing just one pass as he sought out his wingers.