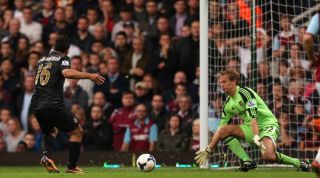 Sergio Aguero is back to his best

Aguero didn't have the best of seasons in a City shirt last year. The 'Aguerooooo' of yesteryear, a fitting finale ringing in the ears as he played a fundamental role in City's 2011/12 title triumph, made way for a quieter season in 12/13. Injury problems meant the Argentine scored only 12 goals in 30 games for City from 22 starts, compared to 23 goals in 34 league games the season before.

However, all the signs at this early stage of the campaign suggest 'El Kun' is back to his brilliant best - and that can only be a good thing, both for City and any of us who enjoy watching great players at the top of their game.

Here at Upton Park, Aguero was in magnificent form. As we mentioned in our preview, one of the main battles that would determine this game was how James Tompkins handled City's striking maestro. Unfortunately for the Hammers, Tomkins struggled.

Aguero, an explosion of energy all game, danced from side to side, faking to go one way and then slyly going another, shimmying, dropping deep and making runs in behind. His two goals were taken with clinical precision. With six goals already, he now has half the tally he managed last season. If Manuel Pellegrini can keep him fit this season, El Kun will be a real asset in what's shaping up as an open title race.

England's qualification for Brazil was a welcome boost to the entire country, particularly against the backdrop of enquiries, manifestos and committees set up by Greg Dyke looking into the state of English football. But while the Adnan Januzaj-England debate drags on, one player who doesn't have to double check his passport or swear allegiance to one of the countless flags he's eligible to represent is Morrison.

Morrison began the game in positive form. The 20-year-old is a wonderfully gifted footballer and his control, first touch and vision are all exceptional for a player of his age. The natural ability is there in abundance.

Morrison was not afraid to go toe-to-toe with City's brutish midfield, making clever dribbles and shimmies wherever possible. His range of passing was also impressive early on.

The England under-21 youngster faded as the game wore on - not before notching an assist, however - and City soon grabbed control of both him and midfield. On the evidence of this game and Spurs a fortnight ago, the former Manchester United starlet definitely has the talent to play for England. Now to add the consistency.

Mohamed Diame is important and Kevin Nolan influential both on and off the field, but once again Noble showed he's the one who makes things happen for West Ham.

Noble has completed more passes than any West Ham player in every league game they've played this season, bar the Everton defeat in which he was sent off, and is their most creative player with 2.3 key passes per game, alongside Stewart Downing. His outstandingly nonchalant pass to set up Ricardo Vaz Te in the 3-0 win at Spurs was but one example of his influence.

Again Noble was instrumental in West Ham's build-up play here. He was their best passer and completed all four of his take-ons. Alas, it wasn't enough to stop Pellegrini's sky blue machine, but Noble deserves plaudits for a good start to the season.

Manchester City hadn't won a game away from home before travelling to Upton Park, and one of their problems from a defensive point of view had been in the air. Both Cardiff and Aston Villa caused City all sorts of problems with high balls and from set-pieces, and we all know how Sam Allardyce loves a robust approach, with physicality and set-plays big features of his teams.

It was interesting, therefore, to see City completely dominate the aerial battle here. Pellegrini's side won 21 of their 29 aerial duels, even without Vincent Kompany. There may have been a few nervous sideways glances when the teamsheet revealed a partnership of Matija Nastasic and Javi Garcia, but City coped in the air not just adequately but admirably. Garcia won more headers than any player, tied with Fernandinho (5).

On their day City can be unstoppable

Pellegrini admitted post-match that preparations had been made to cope with West Ham's 4-6-0 formation, a tactic that bamboozled Spurs at White Hart Lane. But, put simply, who needs chalkboards and training ground drills when you've got Yaya Toure, Aguero and David Silva in the team?

There were moments in this game when the football they played was on too high a level - too masterful for West Ham's players to cope with. Silva's goal was a fine example of this: a gorgeous passage of play to cap off an attacking performance from City that dazzled at times.

With 63% possession and nearly twice the number of passes completed than their opponents, City carved West Ham open at will at times, forging nine shots on target to the home side's two.

Silva's performance was near faultless, Toure ran the midfield with his usual awesome blend of physicality and guile, and the movement of Aguero and Alvaro Negredo caused the Hammers' defence problems all day. Pellegrini could also count on Samir Nasri, and had Edin Dzeko, Stevan Jovetic and Aleksandar Kolarov to change things up if needed.

They may have struggled away from home to date, but when they're all fit and firing, City's forward line really is a sight to behold. Premier League, beware.