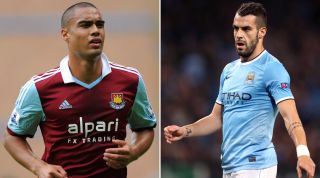 Ravel Morrison! Oh, and 21 other players.

They've been to Villa, Stoke and, er, Cardiff, but Manchester City are yet to register an away win this season. Granted, all three places offer their unique challenges, but two teams in last term's bottom half and a newly-promoted one hardly constitutes the toughest of away campaigns. City have struggled.

Fortunately for Manuel Pellegrini, City's home form has been excellent, and after consigning Everton to their first league defeat prior to the international break the Citizens (does anyone actually call them that?) head to Upton Park looking for a result that can propel them higher than their current position in 5th.

West Ham took the form guide, ripped it into tiny little pieces and threw it in the air like confetti at White Hart Lane in their last game, ramming three goals past a Spurs team that had only conceded two in the six games prior. Having flirted with the relegation zone before that 3-0 win, the Hammers will hope to consolidate in mid-table with a win after two consecutive home defeats.

Sam Allardici's 4-6-0 tactical masterplan worked a treat against Spurs, so it will be interesting to see what strategy he employs here. Does he stick to an ultra-conservative, reactive approach despite being at home or go for a more adventurous but risky style? "We'll keep our cards close to our chest," assistant manager Neil McDonald told the club's official website. "But that doesn't mean to say it'll be the same formation against Man City because we'll be at home. If Man City play exactly the same as Spurs then we'll take all that into account."

In the likes of Aguero, Nasri, Silva and Navas City have one of the cutest attacking sectors in the league - not cat-riding-a-bicycle cute but you get what we mean. Pellegrini's team boast the league's highest average possession percentage, while no team has a lower pass success rate than West Ham so far. Put the two together and you can expect City to see a lot of the ball come Saturday evening.

Spurs consistently tried to play through the middle against West Ham without success, so Pellegrini may use Jesus Navas here to try to counter that. With Alvaro Negredo in excellent form for club and country and Edin Dzeko jubilant following Bosnia's qualification for the World Cup, expect crosses to form a big part of both teams' game-plans.

Injury kings Jack Rodwell (hamstring) and Andy Carroll (ankle, foot - everything, really) are both expected to miss out despite the former coming through 90 minutes for the reserves in midweek. Martin Demichelis also played for City reserves, but he and Vincent Kompany are struggling to feature. Kompany's absence in particular would constitute a huge blow to City's back-line (more on that below in Facts and figures).

James Collins limped off for Wales in midweek, while Alou Diarra is a long-term absentee. Carlton Cole could make his second debut for the club after re-joining the Hammers on a three-month deal.

West Ham pulled off a near-perfect game-plan in beating Spurs but there were hairy moments from them, mainly resulting from mistakes by Tomkins. While his centre-back partner Winston Reid was exceptional, Tomkins was poor in possession - often giving the ball away with needless hoofs and misplaced passes.

He also struggled to deal with Christian Eriksen and Paulinho's runs into attacking midfield positions, stepping up to close them down and thus allowing big gaps in behind. Among others, this led to Jermain Defoe's huge chance just after half-time with the scoreline at 0-0. While Reid made five interceptions on the day, Tomkins didn't make a single one.

As well as his exceptional technique and potency in front of goal Sergio Aguero is also a player of real intelligence, dropping into pockets of space between the lines, forcing defenders to make decisions. Do they leave him be or track him and risk opening gaps? This will be a big challenge for Tomkins on Saturday, and one he must pass if West Ham are to pick up points.

Unless international break-related fatigue sets in, City's vivacious forward line should have too much for West Ham's back-line, particularly in central areas. 1-2.