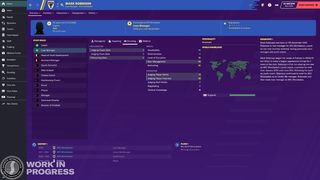 Football Manager 2020’s launch is days rather than weeks away, and its Beta release dropped earlier this week. FourFourTwo were lucky enough to play the Alpha version at Sports Interactive’s offices, and we were immediately emotionally invested in our virtual charges.

With a well-established and popular template, new features tend to represent evolution rather than revolution, but there’s still enough change in FM20 to excite hungry fans of the series.

Here are three of our favourites...

FM have poured a lot of their manpower into improving the match engine experience – and it shows. It's more realistic than ever, in every sense. There’s been a step up in graphics, with stadiums and players now a far cry from previous iterations. Fine details, such as the way weather visibly interacts with the pitch and players, have been introduced and nudge that real-life feeling on even further.

In fact, FM20’s improved graphics are evident from the very start of the game. The realism of the manager avatars has improved massively from FM19 – now your creation (which you can also customise with a far wider range of clothes than before) genuinely looks like a virtual better-looking version of yourself. The whole feel of the game is slicker and crisper than ever.

But improvements to the match engine go far beyond its glossy look, and the increased intelligence really stands out. Here, the hundreds of hours put in by staffers and researchers into watching games and updating programming really shows.

Attacking and defensive AI has been vastly improved to reflect real-world decision-making. Players combine with each other convincingly, and movement off the ball is both intelligent and rewarded. The minute details of whether you instruct overlapping or underlapping runs, or pick an inside forward or raumdeuter, have never had such an influence on your team’s pattern of play and attacking results.

To prevent an unrealistic goal-fest, FM developers had to bring defending up to scratch too, and marking is now more realistic, collective and effective. Goalkeepers, long the bane of criticism from sectors of FM’s fanbase, have had a revamp and are now reliable shot-stoppers.

It’s fair to say that FM’s makers leave no stone unturned, and recent changes to football’s rules – for example, goalkeepers now passing the ball within the box from goal-kicks – are mirrored regularly in virtual matches.

The combination of visual fine-tuning and heightened player intelligence means FM20’s match engine is by far the most immersive in the series yet. FFT became absorbed in our team’s tactics and wider fortunes – which was a shame, as we suffered a miserable start to the season.

Many of FM20’s new features are geared towards long-term players of the game – the core of the fanbase that pours hundreds of hours into their saves every year.

Club vision is no exception, and is aimed at keeping saves fresh even as they progress well into the future. FM’s team have undertaken extensive research to tailor each club’s philosophies to their real-life personality. Good luck to whoever attempted that with Manchester United.

For instance, if you’re managing Borussia Dortmund, your club culture will dictate that you play young players and an attacking style. These objectives are tiered in importance, from ‘required’ to ‘desired’, and form part of a potential five-year plan.

The benefits of club vision might not be fully realised until you’re well into the game, by which point you’ll be kept on your toes by continually having to meet developing wider objectives or face the chop. The objectives are flexible and are subject to change depending on unexpectedly high performance.

Each club’s painstakingly researched individual club vision places more emphasis on club culture and in-game narratives, and reflects real-world long-term demands on managers. If you’re known for playing a certain style of football within the game, the job offers you receive will reflect that – so don’t start off at the wrong team if you want to avoid a certain reputation.

The FM team have spoken to countless staff from the world of football to get the ultimate picture of each member’s role, and in FM20 your backroom staff can do more than ever. For the first time, you can appoint a Loan Manager and Technical Director – both roles that have received increased media attention in recent years.

Delegating roles to your backroom team is much easier to do than before, and players with more or less time on their hands can completely tailor their FM experience to their needs. More detailed tactical advice and a suggested squad are on offer for every game, should you choose to use them.

In fact, behind-the-scenes operations at clubs have received a lot of attention in FM20’s new feature range. When you start at a new club, you do so in a virtual boardroom for the first time. You will also be offered the chance to set a club Code of Conduct for disciplinary matters by your captain. The new Development Centre helps managers monitor their young players’ progress, and is again particularly targeted at long-term players of the game.

Most expensive player value in the game: Neymar, £92 million

INTERVIEW Andy Mitten with Sergio Romero: "Of course it’s best to play all the time... but I'm always ready"

QUIZ Can you name the players who've scored 10+ Premier League goals for Chelsea?