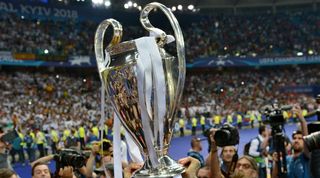 October, eh? The nights draw in, the rain falls, the club-crested wooly hats might even make an appearance. These are no evenings to go out. Lock the door, settle in and watch the world’s best players compete on the most elite stage.

In the modern day, a good player will struggle to make a claim to greatness unless they can cut it on a wet Wednesday night in Salzburg.

Yes, the Champions League is the bar for being world class. So we thought we’d have a look at the best of the best: the UEFA technical study group’s (what a gathering that must be) annual Champions League squad of the season announcement.

We’ve got the list of each squad from the last three seasons – but who do you think makes the cut?

There are 56 players to get (although obviously some have graced these squads more than once), and five minutes to get them. We’re providing you with each player’s club, and their position (although this comes with a health warning: the positions are listed as they are on UEFA’s announcement, so lack specificity and, in some cases, accuracy).

Once your five minutes are up, take a screenshot of your score (with no answers showing) and tweet it to @FourFourTwo so we can share your footballing genius with the world.

QUIZ Can you name the players who've scored in a Premier League match between Manchester United and Arsenal?

GUIDEChampions League live stream best VPN: how to watch every game from anywhere in the world