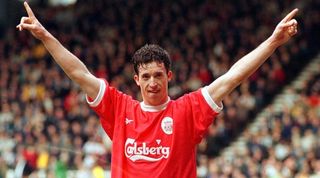 But don’t dare accuse us of phoning it in. No, what we’re doing is a public service. These daily quizzes don’t write themselves, you know. Even when we don’t put that much thought in to them. You should be thanking us (or getting a magazine subscription – Ed.).

Are you buying this? Good.

Liverpool are one of only six mainstays of the Premier League era, but – and we’re pretty sure you don’t need FFT to tell you this – have never won it.

The Reds sit six points clear at the top of the table, with what looks to be their best chance to win a top division title since 1990.

But can you name every Anfield great (and not-so-great) to have bagged 10 or more goals in the Premier League? There are 44 players on the list, from burly defenders to the one they called “God”, and we’re giving you eight minutes to name as many as you can.

Send us a screenshot of your score to @FourFourTwo, and then challenge the Klopp-loving Koppite in your life to do better.

COMMENT The League Cup has a strength that the FA Cup doesn't – an ability to adapt to survive. Here's how to save it

QUIZ Can you name the players who've scored 10+ Premier League goals for Chelsea?