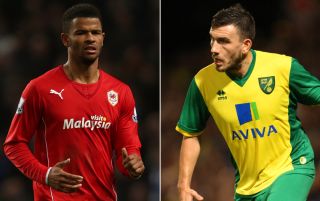 There can be little doubt that February is a make-or-break month for Cardiff's Premier League survival hopes.

The Bluebirds face four teams who could very easily be drawn into the mire - Norwich, Swansea, Aston Villa and Hull. Picking up seven or eight points from those four games is a must if they're to avoid being cut adrift.

That's easier said than done, of course - last time the South Wales side faced a 'six pointer', in the form of a home fixture against West Ham, they lost. That was the second defeat of their current run of four, and one of nine in the last 13 - a spell during which they have picked up just six points.

To make matters worse, Saturday's opponents Norwich have shown one or two signs of improvement in recent weeks.

Only twice in the previous nine Premier League matches have the Canaries conceded more than one goal in a game. In the same period they've kept four clean sheets, two of which came in their two most recent fixtures.

Sadly for Chris Hughton, the improvement at the back hasn't been matched at the other end. Only Crystal Palace and Cardiff have scored fewer Premier League goals this term.

All this points to Saturday's match being anything but a classic, which may suit Norwich, who'll be content to sit back and try and pick off their frustrated hosts.

Solskjaer will at least take some encouragement from Cardiff's improved performance at his former home, Old Trafford. The Welsh side may have been beaten by the champions, but they didn't allow their hosts to have it all their own way.

The Norwegian will demand more of the same on Saturday.

Defender Andrew Taylor is out with a calf injury, but Mark Hudson and Jordon Mutch should both recover from knocks picked up at Old Trafford.

Norwich will again be without hamstrung centre-back Michael Turner and midfielder Jonny Howson (back). Bradley Johnson's red card for an altercation with Newcastle's Loic Remy has been rescinded.

Given Norwich's improved defensive performance and Cardiff's lack of goals, the spotlight will be on Bluebirds striker Campbell in this crucial fixture.

The former Manchester United and Sunderland striker has scored four goals in his last seven matches in all competitions, but was largely nullified in his club's previous home match against West Ham.

His movement in the final third will provide a mental and physical test for Norwich's back four (particularly with the experienced Turner still missing), but he may still find chances hard to come by - in his last three matches, he's been able to muster just three shots.

Solskjaer has had an odd start to his time as Cardiff boss, losing three league games but winning twice in the cup. A first league win is pretty much a must here, otherwise heads may start to drop and things could quickly turn even more sour. It's not entirely inconceivable Vincent Tan could sack two managers in one season, is it?

That may be still unlikely, but Hughton has been sleeping with one eye open for most of the season. His team may be nearer the top half than the bottom three, but the Norwich boss hasn't had much love from the terraces this season.

He's constantly seemed two bad results away from the sack, and an away win againt a relegation rival would certainly go a long way to easing the pressure (for a couple of weeks, at least).

Two of the lowest scoring teams in the league? A goalless draw the last time the two met? Lightning may not strike twice, but these two don't strike too often either. 0-0.