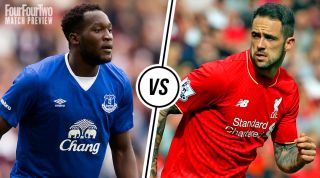 The battle of Merseyside’s big talkers

Perhaps the summer just gone will go down as a decisive one for Everton. A year earlier they had shelled out a club record fee on Romelu Lukaku – one that, by the way, looks more and more justified – and looked set fair to take that tricky leg-up from sixth-place contenders to Champions League hopefuls.

Then Chelsea came sniffing around for John Stones and the logical, resigned conclusion was that, even if not until the witching hour of deadline day, they would get their man and hammer home the fact that this most storied of clubs belongs in that increasingly hard to define netherworld between the best and the rest.

But they kept hold of Stones, by hook or by crook, and after iffy early performances from players and team against Watford and Manchester City respectively, there is a more buoyant feeling about both just now. The Toffees didn’t even need Stones – or Seamus Coleman and the long-term injured Leighton Baines, their first-choice full-backs – to help them stage a superb second-half turnaround at West Brom on Monday night; there is a vibrancy about them right now and, having had plenty of chances to win at Swansea two weeks ago, they could convincingly claim that they should be higher than their current fifth spot.

And perhaps the summer just gone will go down as a decisive one for Liverpool, if only because Brendan Rodgers’ £67.3 million transfer spend will need a far more convincing return than it has seen so far. Like Everton, they were 3-2 winners in their last outing, but the fact that the victory came against a suspect Aston Villa side should temper any excitement, and the way in which Rudy Gestede bullied their backline will have been well noted by Lukaku, who scored a superb header at The Hawthorns.

But it is not all doom and gloom – the manner in which Daniel Sturridge, now back to fitness, scored a pair of his own last Saturday was particularly encouraging, and perhaps the forward’s return will spark enough reminders of happier times to freshen up the feeling around Anfield. You sense that Sturridge, an outstanding soloist, will keep doing as Sturridge does regardless of who is playing around him; in the short term, he might be just the man to decide a tight, tense local derby.

Liverpool, who have not lost a Merseyside derby since October 2010, could do with that – three points would lift them above their rivals and, all of a sudden, make their start to the season appear somewhere around par. For Everton, this is the start of a fiendish trio of games that sees them host Manchester United at Goodison and make the trip to Arsenal. Perhaps it will be then that we find out just how important the summer actually was.

Everton hope Stones and Coleman, both injured, will be back for this one, although the latter seems less likely. Muhamed Besic could be back in contention but Tom Cleverley is a couple of weeks off and Baines is not expected to play again until November. Brendan Galloway, who Roberto Martinez praised for a game-saving tackle at West Brom, should remain at left-back. Christian Benteke is expected to be available again for Liverpool but Roberto Firmino, Jordan Henderson and Dejan Lovren remain on the sidelines.

Lukaku can achieve anything, says Martinez

Lukaku has now scored six goals this season, all of which have come in pairs, and will have noted the way in which Gestede charged onto a left-wing cross to thud home Villa’s second at Anfield last week. Skrtel and his defensive partner Mamadou Sakho both like a physical tussle but will have to do much better this weekend against the Belgian, and will also need to be conscious of his willingness to drop deep and link the play. For Liverpool, who have not kept a clean sheet in their last six encounters, it will be vital to keep him quiet early on. Whoever loses that first header or shoulder-to-shoulder challenge could be in for a long, fraught derby afternoon at Goodison Park.

These two have plenty in common beyond their current geography. Both have managed Swansea, both like the ball to stay on the grass and both are known to like talking, too. Not least Rodgers, whose assertion last weekend that he is a better manager than the one who took Liverpool to within an inch of the title two seasons ago raised more than a few eyebrows. Martinez is still rather hard to place; performances such as the 3-1 win over Chelsea all too often offset by no-shows against lesser opponents under his watch.

But phrases such as his description of Lukaku’s “elite brain” are enough to make him worth listening to and he is certainly more popular than his opposite number right now after an impressive start to the campaign. Just don’t expect journalists at Goodison to have written up their post-match quotes for a good few hours after the derby has finished on Sunday afternoon.

Whatever Rodgers says, Everton have more momentum. An entertaining 2-1 win for the hosts.