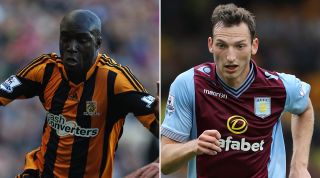 Eighth vs ninth - so first on Match of the Day, right? Right?

Villa haven't lost to Hull since August 1987, when hotly tipped new gaffer Graham Taylor was struggling to get freshly relegated Villa accustomed to Division Two. Much has changed since – Villa went straight up and stayed there, while Hull have been through seven division changes and a stadium switch – but some perceptions remain the same: Hull will be the underdogs and Villa will be reliant on the big lad up front.

Those impressions may not be fully accurate. The hosts are above the visitors in the table, thanks to a strong record at the KC: only Chelsea and Man City have more home points than Steve Bruce's men, who have conceded just one goal in three home games as they work toward that preliminary 40-point target. Mind you, Villa have triumphed on two trips out of three this term, including that memorable opening win at Arsenal.

Villa are proving there's more to them than Christian Benteke. The barrelling Belgian limped off at Norwich, but his substitute Libor Kozak promptly scored the winner; then last week, a determined defensive performance and great team ethic overcame Man City.

It will be interesting to see which side comes out on the front foot. Hull haven't had majority possession in any league match this season; the only side with a lower average possession figure is Villa, who have only had more of the ball in the home loss to Newcastle. With guests who prefer to counter-attack and hosts who haven't won by more than one goal in the last 20 games, this may not be a free-flowing encounter, but the tactics could be intriguing. These sides sit eighth and ninth; now might be the time to start having more belief in themselves.

Hull will be shaking fists at the Humberside sky that four-goal midfielder Robbie Brady is out for a month after a hernia op. Robert Koren and James Chester are not yet in contention.

Villa could welcome back Gabby Agbonlahor, while Andi Weimann should shake off a knock.

With Benteke out, Villa need their Czech replacement to link well with his supporting cast. Sadly for that plan, Libor Kozak didn't have a lot of aerial success in his first league start, winning 1 headed duel in the Man City box and losing most of the battles 40 yards out which a counter-attacking side need their target-man to win.

His passing needs to sharpen up, too, while he might be advised to can the dribbles: against City last weekend, the striker only completed 1 of the 6 he attempted.

Lambert and Bruce have done a decent job of avoiding each other's teams, their only previous meeting being in September 2011 when Lambert's Norwich beat Bruce's Sunderland. Before the game, Bruce had avuncularly advised his former club's manager that it might be difficult to stay up: two months later, Bruce was sacked...

Hull have more ball but Villa bag on the break. 0-1.