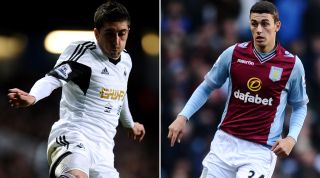 The game Aston Villa aren’t allowed to plunder anything from, in fear of upsetting the Queen.

… which is all well and good, because Paul Lambert’s men are rubbish. Sadly for them they won’t be able to use the 1576 Act for Swans as an excuse when they travel to the Liberty Stadium, although it probably won’t matter much.

After last weekend’s drab goalless draw at home to Southampton, the West Midlanders are almost safe from the drop, five points above the bottom three with four games to go. Sunderland could throw a spanner in the works if they keep shaking things up, but Villa should secure another year in the top flight if they can pick up a couple of points before the season’s end.

Lambert has cut a broken man of late. His visible joy at last week’s Saints stalemate told its own story; it was a welcome point after a four-game losing streak, came without Christian Benteke and was earned in a week where the Scot ditched coaches Ian Culverhouse and Gary Karsa. Add to the mix a not-so-hushed proposed takeover and Villa have themselves a few unhelpful distractions too many.

But, make no mistake, the Southampton game was awful. Villa didn’t even muster an effort on goal before the break, and look utterly hopeless without their star striker’s brutish aerial presence and power. According to reports Lambert will ask for £20 million to improve his squad this summer. He’ll need it.

This weekend Villa travel to Swansea, who scarpered from St James’ Park last weekend with all three points after Cheick Tiote’s daft lunge gifted Wilfried Bony the chance to bag a late penalty. The Ivorian had netted an equaliser earlier in the game, and now has 13 league goals in his debut campaign – eight more than any other Swansea player.

After a poor run of their own the Welsh side are safe, a point above Villa with a relatively kind run-in. Life hasn’t exactly been plain sailing under Garry Monk, and it remains to be seen whether Huw Jenkins & Co. are willing to give the long-serving stopper a proper go with the club’s hard-earned sterling this summer. With a win percentage of just 21% up to this point, it seems unlikely.

But This is Football, they say. Anything can happen… except a Villa win here.

Michu’s sore ankle should clear up in time, leaving Swansea with a clean bill of health. Chico is still suspended after his red card against Chelsea.

Villa will almost certainly face another game of tiki-taka tedium like last weekend, and if they can shut out the Swans like they did Southampton (Mauricio Pochettino’s side mustered just 3 efforts with 69% possession) then this will be a job well done.

Swansea’s Hernandez has started the last two matches just behind front-man Bony, but rather than look to supply the striker directly, he is keen to spread play wide to Wayne Routledge and/or Jonathan de Guzman. He was the game’s most prolific final-third passer at Newcastle last weekend, and his combination with De Guzman was the game’s joint-second highest.

Villa’s Westwood won’t see a huge amount of the ball, but must ensure he uses it economically when he does get it. Against Southampton he completed just 66% of his passes, and didn’t involve himself defensively (in 90 minutes he didn’t make a tackle, interception or clearance). Like Hernandez his passing is often focused wide, where this game may be won or lost.

Swansea’s ‘Monks’ knows his men aren’t safe from the drop just yet. “Right now at this stage of the season it's about getting the job done and whichever way that is, you take it,” he declared after the late win at Newcastle last weekend. After handbags in training the previous week, the Swans' chief – involved in an altercation with the ever-affable Chico before taking the reins – quashed suggestions of a divided team. “If our squad wasn't together you wouldn't get a performance like that,” he said. “It's clear to see the players are together and they're fighting for the club.”

Lambert, meanwhile, just wants the season over and a long holiday on an island where nobody will find him. “It's been a hard week, a really hard week,” weeped the Scot after the Saints draw. “That was a huge, huge point for us, considering what's been going on. We had to stop the bleeding… and to get something.” Don’t worry Paul, only four more to go.

Swansea, buoyed by their Toon triumph and at home, heap a little more misery on their troubled guests. 2-0.