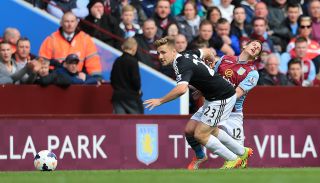 “Sometimes in football matches you get big points and you get huge points. That was a huge, huge point for us,” reflected boss Paul Lambert after seeing his side end a run of four consecutive league losses with a hard-fought stalemate with easy-on-the-eye Southampton at Villa Park.

Outclassed for the majority of the first half, the home side upped their intensity levels after the break to ensure the draw that, combined with results elsewhere, leaves them five points clear of the drop zone with a vastly superior goal difference over their rivals.

Home side stop the bleeding

“We had to stop the bleeding, stop losing football matches,” added Lambert, whose team had failed to pick up a single point since stunning Chelsea.

They had not lost five league games on the spin since January 2001, but that record looked like being matched early on as the visitors dominated.

But those 3 chances in the opening half an hour would prove to be the sum of Southampton’s endeavours, as their greater possession ultimately counted for little.

Villa, on the other hand, improved as the contest progressed. The hosts had 0 attempts on goal in the first 45 minutes, but Artur Boruc was a much busier keeper after the break; the determination of Gabriel Agbonlahor and Marc Albrighton paying dividends down the channels.

Lacking the significant presence of Christian Benteke to ‘hit’ up top was always going to make life difficult for Lambert, and with Libor Kozak sidelined and Grant Holt benched, the home side unsurprisingly struggled to make an impression in the Saints’ half.

One early Guzan long ball which was flicked on by Agbonlahor straight to Boruc suggested this was a tactic that shouldn’t be persevered with; the local lad winning just 3 of his 15 aerial duels all afternoon.

Without a natural target, the home side had to work the ball wide and had increasing amounts of joy as the game progressed. Ryan Bertrand was an oft-used outlet down the left; the Chelsea loanee involved in Villa’s four most successful pass combinations, receiving the ball on 26 occasions and putting in 3 crosses.

Albrighton’s influence on the game also aided the home side’s hopes of snaffling all three points, the wide-man making a game-high 9 ball recoveries on top of 3 tackles, 3 interceptions and seeing a second half strike sting the palms of Boruc.

Saints should shoot on sight

Results are of little significance for Southampton now, sitting snugly in eighth and unlikely to finish any higher or lower. They are on course to equal their highest Premier League finish and Mauricio Pochettino believes 2013/14 represents a memorable season. But Saints could easily have left celebrating a win, putting a tad more pressure on Manchester United in seventh, had they opted to pull the trigger more.

Lambert’s early pair of chances suggested Villa could be in for a rough afternoon, but for all Saints’ possession (509/614 passes completed) the only other opportunity they fashioned was a Davis shot after 32 minutes that was saved by Guzan.

Pochettino felt Southampton should have been awarded a penalty after Nathaniel Clyne’s low cross 10 minutes from time cannoned off Bertrand’s arm, but the result could have been put beyond doubt long before if the Argentine’s side had more of a cutting edge.

Countless promising positions out wide failed to result in shots on goal after the interval, as just 1 of 9 crosses found its target, while several opportunities to let fly from 20 yards were declined in favour of moving the ball out to the flanks.

By the end, Saints fans were even encouraging anchoring midfielder Victor Wanyama – yet to score for the club – to have a pop from distance, but he too thought better of it.

Metronomic Wanyama has been missed

Speaking of Wanyama, the Kenyan midfielder has endured a stop-start season due to injury, but showed at Villa Park just how valuable he is to the Southampton system.

Making only his third start since the turn of the year, he was comfortably the best passer of the game, completing 79 of 87 and only misplacing 3 passes in the first period as he instigated many a Saints move by receiving the ball on 68 occasions.

The 22-year-old was also a dominant presence in the air, winning a game-high 8/11 aerial duels as he capitalised on the absence of fellow countryman Benteke.

The former Celtic man chipped a bone in his lower leg during the home defeat against Villa in December. He went off at half-time at St Mary’s and proceeded to miss the next two months through injury, during which time his team-mates won just one of nine league games until his return at Fulham at the beginning of February.

"It felt good to be back. It's been long since I've been on the pitch and I'm happy to be back. I want to work hard and get out there and enjoy my football again,” he told Sky Sports afterwards.

“We knew it was going to be difficult and we had a few chances. We were unlucky not to get three points. We just have to keep going and try to win every game from now on. That's our aim and try to improve every game. With our style of play, we started well but we had many injuries and that pulled us back a bit. We hope to continue improving and next season we will hopefully get better."

Shaw should be off to Brazil too

And on Saturday’s showing, left-back Shaw should be boarding the plane too, as the debate continues over whether he or Ashley Cole - who has unquestionable experience but who also has played just 192 minutes of Premier League football in 2014 - will accompany Leighton Baines to Rio.

The academy graduate did little to dissuade England boss Roy Hodgson that he should get the nod, giving Leandro Bacuna and Ahmed El Ahmadi a torrid time down the Villa right, despite appearing to pick up an injury midway through the second period.

Shaw completed 10 of his 12 passes in the attacking third, was successful with 4 of his 6 take-ons and 5/6 tackles and set up 2 chances as he bombarded down the left flank.

One such raid resulted in him centring the ball for Lallana who should have tapped home the opener after the interval, but the cross was slightly behind the captain who fluffed his lines as he bore down on Guzan’s goal.