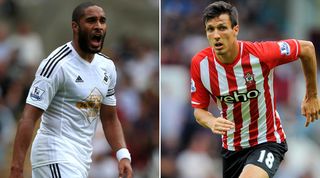 This is third vs fourth?! Swansea are supposed to be rubbish and Southampton didn’t have two players to rub together a few weeks ago.

The manager’s office at the Liberty Stadium, 5:30pm on Saturday evening. A blond-haired Harry Potter and an albino gorilla called Snowflake mull over a 1-1 draw with a glass of wine.

Bear with us, this is an image FFT has struggled to displace all week.

“I thought that was a good game,” Potter says. “I agree,” replies Snowlflake, “We’re in charge of two sides that play attractive football.

“Most pundits had it in for us this season, and here we are sitting pretty in the rarefied atmosphere of the Premier League table’s peak.”

Now, Garry Monk may not actually be a wizard – regardless of what Italian paper Gazzetta dello Sport may think – and Ronald Koeman is only nicknamed after an uncanny resemblance to an albino gorilla that used to reside at Barcelona zoo, but this is a conversation that may well take place after Saturday’s fixture.

Imagining literary wizards and caged primates is the only way we can get through the week without reaching for a bottle of gin and half a bottle of Valium, OK?

Monk’s Swansea have been impressively efficient, scoring from relatively few shots and relying on the creative instinct provided by the revitalised Gylfi Sigurdsson and Nathan Dyer’s right-wing thrust.

Though gunned down by Diego Costa at Chelsea, the Swans’ well-honed dominance of possession, developed over seasons, has been enough to overcome conceding a near league-high number of shots thus far. Midfield pair Jonjo Shelvey and Ki Sung-yueng have been just as conspicuous in the engine room.

Against a wretched Newcastle, Southampton cut quite a dash. A fluid 4-2-3-1 remains from last season, but with new blood dotted everywhere. Dusan Tadic has four assists in his last six league games and looks a shrewd buy down the left wing, while Graziano Pelle has four goals in five Saints fixtures in all competitions.

Throw in smooth centre-back Toby Alderweireld and Koeman has brought together a squad to rival last year’s, despite the mass exodus. Shane Long, however, will never be a right midfielder.

Jordi Amat will be out for six weeks after damaging knee ligaments at Stamford Bridge and will be replaced by Argentine international Federico Fernandez. 'Merton Xavi' Leon Britton’s own knee injury still keeps him out.

Jay Rodriguez remains a long-term absentee with knee trouble, so Koeman’s selection headaches are purely tactical. Principally, he must choose between Jack Cork or James Ward-Prowse as playmaker behind Pelle, which is a 1970s detective show that never was.

He may not be easy on the eye, but Southampton’s Italian forward has proven deadly in front of goal this season. Pelle’s attempted volley for his second goal against the Magpies was so terrible, it fell for Tadic to collect and square back to the former Feyenoord man to tap in.

Williams won’t be as forgiving as his near namesake Mike Williamson or Fabricio Coloccini. Settled again after rumblings of discontent last term, the 30-year-old has the physique and determination to dominate the 6ft 4in Pelle. It should be quite a contest.

What do you mean you actually want some insight, instead of the ramblings of a sleep-deprived hack who needs to stop hallucinating about fake post-game managerial meetings? You can only have positive things to say about Monk and Koeman after a summer where both seemed to be in charge of clubs on the wane. Both stick to their principles and you get the impression their players respect them for it. Sigurdsson was an inspired bit of business for Swansea, while Koeman proved he only wants players who actually want to be at St Mary’s by sending Saphir Taider back to Inter Milan. In getting Morgan Schneiderlin to perform, the Dutchman deserves great credit.

Two easy-on the-eye teams to play out an entertaining 1-1 draw.