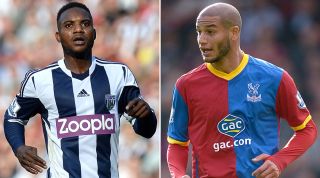 The second stage of Keith Millen’s interview for the Crystal Palace job?

It's been a strange couple of weeks at West Brom. Their surprise win at Old Trafford and credible draw with Arsenal were followed by a frustrating stalemate at Stoke and a heavy defeat at Liverpool. While five points from those four matches isn't exactly a poor return, the Baggies will need to start picking them up with more regularity if they're to find themselves pushing for the Europa League places rather than looking over their shoulders.

One team who have no need to look over their shoulders are Saturday’s visitors to The Hawthorns. Crystal Palace are now bottom of the Premier League, after Sunderland’s first win of the season against Newcastle on Sunday. That blow came 24 hours after the Eagles had performed reasonably well in their defeat to table-topping Arsenal. That showing will give them some encouragement ahead of this fixture, but the south Londoners remain in a state of flux, with no new manager and no sign of an imminent appointment. Rumours on Thursday morning suggested Chris Coleman was ‘in talks’, but the same was previously said of Tony Pulis and Martin O’Neill.

Palace can ill afford for this period of uncertainty to drag on too long – co-chairman Steve Parish’s priority will obviously be to find the right man, but he shouldn’t undervalue the importance of doing so quickly. Doing so represents Palace’s only chance of survival.

In the meantime, caretaker Millen will continue his own audition for the role. A win on Saturday would certainly help his cause, but Palace need a man with top-flight experience.

West Brom forward Scott Sinclair has an outside chance of returning from a hamstring injury, but the Baggies will still be without Morgan Amalfitano (knee) and keeper Ben Foster (foot). Palace will miss longer-term absentees Jonny Williams (ankle), Jack Hunt (ankle) and Glenn Murray (knee ligaments), although the former is said to be making "rapid progress".

Palace’s hopes of causing an upset in the West Midlands will rest on the shoulders of the much-mocked Moroccan marksman. The former Arsenal striker performed relatively well against his former side last time out, winning six aerial duels – no mean feat up against the gargantuan Per Mertesacker. His strength and aerial ability can make him a good outlet for a team who’ll struggle to keep the ball out of their own half. If he can find the form he showed in his first season at the Emirates, then he could start doing some damage.

Steve Clarke and Millen have, unsurprisingly, not gone head-to-head as managers before. The Palace caretaker – and previous No.2 - may see the Scot as something of a role model; Clarke was an assistant manager at Chelsea, West Ham and Liverpool before taking the top job at West Brom.

The Baggies to deal another blow to the beleaguered Eagles. 2-1.