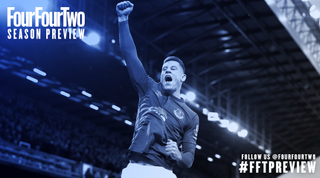 A lot is made of the Europa League’s effect on domestic form. Yes, the Thursday-Sunday routine to the continent’s furthest outposts is draining. Yes, the additional games undoubtedly have an effect on tired legs. That said, teams in other leagues seem to manage. Just look at Sevilla.

Liberated from their midweek schleps abroad, you’d expect Everton to fare rather better than last season’s 11th-place finish. In 2014/15, manager Roberto Martinez lost some of the goodwill afforded him on Merseyside after an excellent first season, the general feeling that too many passes were wasted sideways. A few more direct ball carriers wouldn’t go amiss. An upgrade on Aiden McGeady, basically.

The Toffees’ spine is very strong. Indeed, the whole back four is made of stern stuff. John Stones (for now at least) and Phil Jagielka are among the league’s best centre-back partnerships and complement Seamus Coleman and Leighton Baines’ attacking intent.

The England modster has long since been the Prem’s most consistent left-back, nine assists last season and the most chances created for his position in the league well worthy of his place in the FourFourTwo Stats Zone Team of the Year. Though 2014/15 was a quieter campaign for Coleman, the Donegal lad is still one of the most exciting attacking prospects from deep.

Further forward, James McCarthy is a calming midfield presence alongside an improving Muhamed Besic, Gerard Deulofeu returns after impressing two seasons ago on loan, while a better season is expected in front of goal from Romelu Lukaku.

Although sections of the Everton support would disagree, they have a fine manager, too. Martinez has the perfect blend of Premier League experience and continental expression and, with the tweak of a marginally more direct approach, should inspire an improvement this season. In short, there’s too much quality in this squad for another bottom-half finish.

The squad is very thinly spread and injuries in key positions could cause serious problems. Up front, there’s little to fear other than Lukaku: Arouna Kone is limited, Steven Naismith, Deulofeu and Kevin Mirallas all too lightweight to play as a sole striker.

The same is true out wide. Mirallas, Deulofeu, Naismith, McGeady, Steven Pienaar are too similar – all capable widemen, but lacking real penetration. Aaron Lennon, on loan from Spurs last season, provided directness if not end product, and the feeling is a similar winger is needed.

Another area of note is central midfield. Gareth Barry increasingly resembles a tugboat and must be put out to pasture, regardless of the Premier League experience he offers. Too often last season the 34-year-old’s passing was too sideways to offer any penetration. Leon Osman, Besic and new arrival Tom Cleverley would all offer more.

"I think eventually I want Ross to play that position,” said Martinez halfway through last season about the possibility of the 21-year-old playing in front of the back four, “but 'eventually' is maybe 100 games in the Premier League.” Last term was a disappointment, Barkley confessing to some “self-doubt” as the campaign progressed, but the England tyro would love a shot scheming from deep.

2) Can Gerard Deulofeu find his form?

Nobody at Barcelona doubted the Spaniard’s ability – indeed, at one time, the 21-year-old was spoken about in the same breath as Lionel Messi at La Masia – but question marks against Deulofeu’s mindset prompted his Camp Nou exit. After an intermittent year at Sevilla, the £4.2m signing must recapture his 2013/14 form, when he shone on loan at Goodison Park. Surely he’s too talented to fade away.

If Premier League games finished at half-time, Everton would’ve finished fifth (instead of 11th) last season. Whether this is down to physical fitness or mental tiredness is open to debate; what is clear is that for the Merseysiders to improve in 2015/16, they must arrest a worrying propensity to concede in the second half of games.

Club captain and defensive stalwart, the former Sheffield United defender is Everton’s leader and the go-to player when things start to turn ugly. Not blessed with great pace, the soon-to-be 33-year-old has the positional sense to compensate and is the perfect man to guide John Stones through his early career.

What we’ll be saying come May

Helped by a season without Europa League football, Everton have had a much-improved season and will play in next season’s, er, Europa League. Plus ça change, plus c’est la même chose. [The more things change, the more they stay the same.]

To see where FourFourTwo think Everton will finish – along with a bespoke two-page preview – get our special new season issue, out Saturday 1 August.