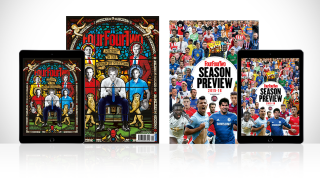 Wimbledon is over, a pee-stained Chris Froome has yawned his way to Tour de France glory and the less said about our attempts at calling the Ashes the better. We’ve missed football nearly as much as you have – there’s a limit to how many ITV4 repeats of 1970s cop drama The Professionals you can watch, after all – so you’ll be glad to hear that the new season is almost upon us. And to celebrate, FourFourTwo is on hand to give you the skinny on 128 teams across England and Scotland in our big, shiny and perfectly formed 100-page pre-season supplement. Disagree with some of our predictions? Think you can do better? Of course you do, it’s a game of opinions after all, Brian. This season, we want you to tell us what you think and have dedicated our supplement’s back page to your predictions. Tweet us yours using the hashtag #FFTPREVIEW

But that’s not all, oh no. In your full-to-bursting main issue, we’ve got the usual batch of exclusive interviews, in-depth features and wacky stories from around the football world.

Last season was hardly a classic in the Premier League. Chelsea ran away with the title, without so much as a challenge from a lethargic Manchester City, unconvincing Arsenal, insipid Liverpool and inconsistent Manchester United. The Blues didn’t exactly win many bonus marks for style, either. Yet there are a number of reasons why we think this will be a season of salvation.

United will be a different beast after an extensive summer outlay on Memphis Depay, Morgan Schneiderlin and Bastian Schweinsteiger, among others, with their noisy neighbours City have added Raheem Sterling and Fabian Delph to their ranks to ease the burden on Sergio Aguero. Further down the table, Slaven Bilic is a popular, if risky appointment in West Ham’s final season at Upton Park, Swansea and Stoke will want to continue their progress and West Brom to add to flair to their Tony Pulis-inspired work ethic.

At the other end, it’s difficult to pick three main contenders for the drop. Now Christian Benteke-less, Aston Villa have hovered for three seasons, while Leicester will do well to repeat last term’s great escape. Throw in promoted Norwich, Watford and Bournemouth and it could be the most exciting Prem season in years. Speaking of which, to mark Bournemouth’s maiden top-flight campaign, we spent the first day of pre-season on the South Coast as Eddie Howe’s men get to grips with being a Premier League club.

The Cherries aren’t the only Prem focus. We have exclusive interviews with Manchester City captain Vincent Kompany, Arsenal's Aaron Ramsey, Spurs hot shot Harry Kane and Man United metronome Daley Blind, and analyse how Chelsea can fix Radamel Falcao, what Roberto Firmino must do to replace Raheem Sterling at Liverpool and ask whether Juanmi can be Ronald Koeman’s latest Southampton masterstroke.

You want more? Well, we have a five-page picture special from the Women’s World Cup, to celebrate England’s Lionesses’ thrilling third-place finish, explore the history of rule-benders in football’s biggest cheats and go back to the early 20th century to the extraordinary life of Max Woosman, the former Manchester City and England captain who scored a century at Lord’s, won Wimbledon, made a 147 break at snooker and once beat Charlie Chaplin at table tennis. With a butter knife.

When we asked for your questions to put to Gary Neville, some of them were even usable. Find out what the former Manchester United defender had to say about rows with Fergie, how much he hates Liverpool and, most crucially, did he really once chat up a mop?

Elsewhere, this month’s Planet Football previews the new season across Europe and beyond, while Performance is all about training like a superstar. We get Sergio Aguero, Lionel Messi and Cristiano Ronaldo to tell us their secret so you can start your new season with a flyer.

Finally, there’s some Upfront silliness as ex-Chelsea forward Salomon Kalou sings us Miami by Will Smith (but refuses to sing Gettin' Jiggy Wit It), we ponder footballers’ dodgy barnets and chat to recently retired boxing legend Carl Froch about his beloved Nottingham Forest. Plus, Jonathan Woodgate tells us the best XI players he’s played with. Buy it, download it, read it. You won’t need anything else to get yourself ready for the new season.