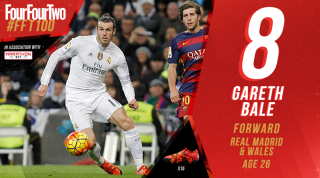 Guide me, O thou great Redeemer. Gareth Bale may not have excelled as much for Real Madrid in 2015 as he did in 2014 – scoring a crucial second goal in the Champions League final as he did to help Madrid to la Decima – but for Wales he has been manna from heaven, if not bread.

Bale scored seven of Wales’ 11 goals in their Euro 2016 qualification campaign, a proportion far greater than any other player among the top nations and scorers, and he had a hand in three of the other four to boot. His team’s successful passage to France, for their first major tournament since 1958, was based largely on a stingy defence, but without Bale scoring at the other end, it would have yielded nothing. He guided his country to one of their greatest footballing successes.

Such is his importance to the national side that a visiting Arjen Robben was recently hailed as “just a sh*t Gareth Bale”. They like to sing in those parts, and the supporters weren’t too far wrong as it happens – with the Dutchman sitting two places below Bale in FourFourTwo's Best 100 Players in the World 2015.

In the last calendar year Bale has plundered five goals in just six Euro 2016 qualifiers. A brace in March helped see off Israel, and then in Cardiff in June the former Tottenham winger knocked in the crucial goal to earn victory over FIFA rankings-toppers Belgium. And it was fitting that the powerful attacker should notch against Andorra in the Dragons’ final qualifer, swivelling to hook in a left-wing cross late in the game, with characteristic power behind the shot making it far too hot for the keeper to handle.

The 2-0 loss to Bosnia-Herzegovina was hailed as the best defeat of Bale’s career as Chris Coleman’s team progressed to next June’s shindig in France: “It’s going to go down in history,” beamed the 26-year-old.

It’s because of such international displays that our Redeemer keeps his place among the top 10 in this year’s Best 100, after failing to convince in his second season at the Santiago Bernabeu. Maybe that’s slightly harsh on Bale: his 13 goals last term were only two fewer than his debut year in Spain.

However, he was much less deadly in Europe, down from a half-dozen in that Decima campaign to only two in the 2014/15 Champions League. Several costly misses, not least against Juventus in the latter stages of the tournament, ensured that Carlo Ancelotti’s side were unable to reach back-to-back finals.

Indeed it was earlier this year that the Welshman was jeered by some sections of the Bernabeu, such was his poor form for los Blancos. Subsequent media analysis may have been an overreaction, but Bale’s actions were put under the microscope after being criticised for greedily shooting rather than passing. And this in a team that also included Cristiano Ronaldo.

With pressure mounting on poor Gareth, the former Southampton and Tottenham Hotspur defender’s agent clumsily waded into a supposed developing Bale-Ronaldo rift, claiming that his team-mates didn’t pass the ball to the Welshman enough.

“Real have to work with Gareth and pass the ball to him more. He’s going to be the best player at Real Madrid when his team-mates work with him and help him. Hopefully Real will come to terms with this,” explained Jonathan Barnett, before Ancelotti promptly told the representative to put a sock in it.

Bale has only managed to add three goals to his La Liga record this season, although the arrival of a new head coach in Rafael Benitez and two more muscle injuries have not helped his cause. He looked woefully short of match fitness in the recent Clasico thrashing by Barcelona and there has been talk of a positional change, too. But there could be more good times ahead and a return to form: Rafa has opted to give Bale more of a run in the No.10 position.

“Gareth’s now playing in a better position [more centrally], where he wants to play”, Barnett told The Guardian last month. But then at a club like Real Madrid, the bar is set incredibly high to play in the forward positions, and there remain questions over how best to accommodate the BBC (Bale, Benzema, Cristiano) line-up and whether it can be effective in the long term.

Non-stop speculation surrounding a return to the Premier League was continually batted away over the summer by Barnett, as the representative seeks to protect his most expensive of charges.

Much is expected from the most expensive player in world football and rightly so. However, if Bale suffers from another underappreciated season it may not be for much longer that this pilgrim in a barren land hands in the famous white shirt and returns to welcoming climes instead.