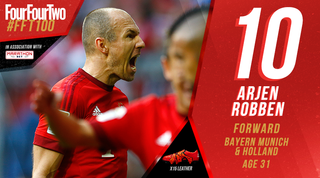 In Arjen Robben’s 15th full year as a professional, full-backs are still searching for an answer to his wing-play approach. In many ways, the Bayern Munich man has hardly changed since he made his Groningen breakthrough at the start of the century, but his mastery of the trade is such that Robben’s now-familiar blend of sizzling speed, terrific touch and dynamic dribbling continues to make him such a dangerous proposition – and one of the world’s greatest wingers even as his 32nd birthday looms.

The last 12 months haven’t been quite as eventful as the dozen that preceded it, when the Netherlands international was one of the standout players of the 2014 World Cup in Brazil and an ever-present in Pep Guardiola’s starting XI at club level. Injuries have again hit hard a player who has never seemed too far away from a lengthy spell on the treatment table; in the first 11 months of this year Robben started only 15 Bundesliga matches, almost half of which came in February and March.

And yet there is little doubt that this is someone who remains a world-class operator, perhaps no longer at the absolute peak of his powers but still some way short of being over the hill. Wayne Rooney and compatriot Robin van Persie – both born within 21 months of the former Chelsea and Real Madrid flyer – are just two players to have suffered substantial dips of form in recent times, forced to fend off accusations that they are past their best and no longer good enough to make an impact at the highest level. Robben, still an essential part of arguably the best club team around, remains as relevant as ever in lists like these.

His 2015 began with a shock 4-1 defeat at Wolfsburg, as for the first time in two years Bayern Munich lost a top-flight game before the Bundesliga title had been wrapped up. Things immediately got better for both player and club, though: the Bavarians collected 13 points from the next 15 on offer – Hamburg were vanquished 8-0, Paderborn thrashed 6-0 and Cologne brushed aside 4-1 – with Robben at his menacing best out on the right, scoring seven goals and providing four assists in five league games.

He found the back of the net in a variety of ways: there was a deft header from a corner in the draw with Schalke, cleverly glanced back across goal and past goalkeeper Timon Wellenreuther; a penalty followed by a poacher’s effort against Paderborn, the latter coming from partner-in-crime Franck Ribery’s cut-back; and a trademark dribble infield against Hamburg that ended with Robben curling into the top corner.

Injury intervened soon after, with the 31-year-old limited to just 16 minutes of action in his side’s final 14 matches of the campaign in all competitions. While this scarcely mattered in the Bundesliga, Robben’s absence proved pivotal when it came to the Champions League.

His provision of pace and width was sorely missed as Bayern came unstuck in their enthralling semi-final with Barcelona, and it was no surprise that the Germans, recognising their reliance on Robben, went out and spent an initial €37 million on widemen in the summer – in came Douglas Costa and Kingsley Coman to ensure the Bavarians wouldn’t be caught quite as cold were the Dutchman to suffer similar fitness woes this term.

Guardiola would need them. Robben responded brilliantly to the challenge of increased competition for places, impressing in Bayern Munich’s first three Bundesliga games before being ruled out for two months with a groin problem. Costa and Coman have shown their own credentials with some dazzling displays since then, but Robben’s enduring class and quality meant Guardiola restored him to the XI as soon as he could.

The sheer numbers rarely do his influence justice, but four goals and two assists in nine league and Champions League appearances is a commendable return for a player who has been in and out of the team.

Catch me if you can

As has been the case for many of the speed merchants who have gone before him, Robben will eventually have to adapt his game when he can no longer breeze past opponents with such ease.

It’s a challenge that many have struggled to overcome, particularly those who, like the man Guardiola once professed to being in love with, have been dogged by injuries throughout their career.

It would be foolish in the extreme to write Robben off, however. As full-backs the world over who have been forced to watch the ball fly into the far corner after being deceived by that drop of the shoulder can testify, stopping Bayern’s wing wizard is far easier said than done.