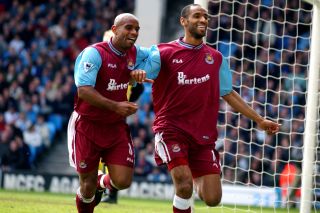 West Ham United's 2002/03 vintage still hold the unenviable record as the team with the most points to be relegated at the end of a 38-game Premier League campaign.

Despite having a squad bursting with young English talent - including Jermaine Defoe, Michael Carrick, Joe Cole, David James and Glen Johnson - the Hammers finished in 18th place despite collecting 42 points, comfortably above the usual safety line.

For Fredi Kanoute, the former Mali international who was part of that side before going on to play for Tottenham, that experience still keeps him up at night.

"It was so disappointing – it’s something I still think about a lot," Kanoute tells the Summer issue of FourFourTwo, out now. "It was almost impossible for that team to get relegated, but football is like this sometimes. When a season starts badly, it keeps getting worse and you can’t seem to turn the tables."

For Kanoute, the team's demotion was all the more frustrating due to a recurring injury problem which prevented him from helping his team-mates.

"I had a strange groin problem that season, which was particularly annoying because it wasn’t too serious," the striker recalls. "However, every time I returned to training, I broke down again. I came back for a few games near end of the season, and it was frustrating not being able to help the team more. I’m not saying it would have been different if I’d been there from the start, but I felt the responsibility of not being available on the pitch to help my team-mates."

Despite the nightmares about that particular epsiode, Kanoute enjoyed his time in England, where he played football between 2000 and 2005.

"I really liked it," he says. "I think it coincided with the fact that I suddenly had to become a man. I was in England on my own and had to make it work. It was difficult at the beginning, but I enjoyed the independence and responsibility I had on my shoulders. What I picked up straight away was that things were less strict than in France – we had more freedom in the way we played. I’ll always be grateful to West Ham, because they made me feel at home from the first day."

Read the full interview with Fredi Kanoute in the Summer 2020 issue of FourFourTwo magazine, available in shops and online from now. Our new magazine looks at the 99 things you’ve forgotten about the noughties, from battles to beach balls, looking at the decade that revolutionised the game as we know it; we examine the golden generation and where it went wrong for England, look over the extraordinary decade of Thierry Henry, remember the fall of ITV Digital, the highs and lows of Harchester United - the fictional side from Sky’s popular drama Dream Team - and look at the formidable partnership of Kaka and Andriy Shevencko over in Milan. We also chat to Jerzy Dudek, Jimmy Floyd Hasselbaink, Alan Stubbs and Fredi Kanoute.