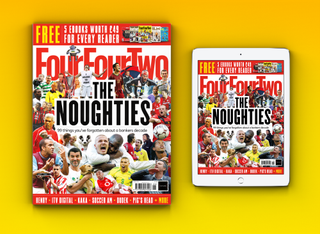 Buy a copy now and get it delivered free to your door!

First a message from our editor,  James Andrew

With football still on hold, we’re turning back time to relive one of our favourite decades. So in the words of Pulp’s Jarvis Cocker: let’s all meet up in the year 2000.

If the ’90s was the decade that truly changed football in this country and on the continent, then the noughties was the one in which everything got supersized. The clubs got richer, the players earned more money, the stadiums got bigger and the profiles of star names exploded.

Manchester United and Arsenal were still the two teams to beat at the start of the decade, but Roman Abramovich and Jose Mourinho combined to make Chelsea a brand new threat to be feared in west London. By the end of the decade, the Blue Moon was starting to rise in Manchester.

In this issue, we guide you through the noughties and highlight 99 things you’ve possibly forgotten about it – from Asprilla at Darlington to a pitch-invading Karl Power.

Meanwhile, former Manchester United defender Mikael Silvestre answers your questions and Jerzy Dudek chats about the night he became a Liverpool hero in Istanbul, while we chart the rise of El Clasico and fall of ITV Digital. If that’s not enough, we also celebrate Thierry Henry and go behind the scenes with Harchester United: the fictional side from Sky’s popular drama Dream Team.

Take care and enjoy the mag.

The ’90s may have jolted English football out of its comfort zone, but the noughties changed it beyond recognition. From battles to beach balls, it certainly wasn’t dull...

The (not so) Golden Generation

England’s talented crop were tipped to bring home big honours during the decade, but fell short when it mattered most. FFT finds out why from those in the thick of a media frenzy starring fake Sheikhs, strikes and WAGs gone wild.

Thierry Henry ruled the Premier League for more than half the decade, then landed the Champions League as part of world football’s most celebrated club side of all time. Was there a better player in the noughties? We say non…

The fall of ITV Digital

In 2002, Football League clubs were plunged into a financial crisis when ITV’s colossal deal crumbled before them. The repercussions were far-reaching and no one emerged unscathed – FFT uncovers the catastrophe from within.

Kaka and Andriy Shevchenko earned their rightful places in Milan’s history books during the noughties, each winning the Champions League and Ballon d’Or. The duo’s magic couldn’t last forever, but it sure was divine while it did.

The most dramatic match of the noughties produced an unlikely hero. In his own words, Jerzy Dudek explains how he overcame hard times at Liverpool to become a Champions League legend – and later almost hit Rafa Benitez in the face…

Barcelona and Real Madrid despise one another – but it took a symbiotic relationship in the noughties to make their rivalry the biggest in world football. Via Galacticos and Guardiola, FFT delves into the blossoming of a bitter romance.

Dream Team survived 10 seasons following its release in 1997, which was more than could be said for many of the characters. FFT hails the cult classic loved by the real-life stars it portrayed.

You Ask The Questions: Mikael Silvestre

The former Manchester United, Inter and France defender reveals why he chose Old Trafford over Anfield, how Arsene Wenger lured him to Arsenal in the middle of his Manchester City medical, and what it was like watching Alex Ferguson belt a football boot at David Beckham’s face.