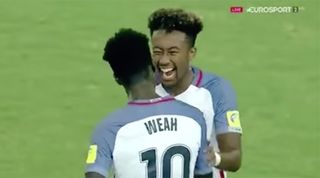 Timothy Weah scored three of USA's five goals in their comprehensive 5-0 victory over Paraguay, in front of a 35,000-strong New Delhi crowd on Monday evening.

The 17-year-old New York-born youngster, who joined Paris Saint-Germain in July, put the USA a goal up in the 19th minute.

But it was his second strike shortly after half-time which really caught the eye.

Weah picked the ball up on the left flank and effortlessly jinked past Paraguay full-back Jesus Rolon, before arrowing a fine effort into the top corner.

His hat-trick helped the USA book their place in the U17 World Cup quarter-finals, where they will face the winner of England's last-16 clash against Japan.

Life is fairly busy for the Weah family right now – namely in that 1995 FIFA World Player of the Year winner George is trying to become president of Liberia. No sweat.