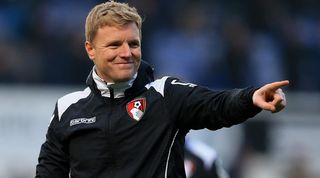 The precise moment Eddie Howe began his journey to becoming one of the hottest managerial properties around is quite easy to pinpoint, even if the Amersham-born man didn't quite realise it at the time.

Howe, a talented and composed centre-back with two caps for England Under-21s, had just become Harry Redknapp’s first signing at Portsmouth, snapped up for £400,000 with a belief that he was a defender going places.

Only he wasn’t. In his first game with the Fratton Park outfit, the then-24-year-old suffered a knee injury that, five years and plenty of pain later, would result in him having to hang up his boots prematurely.

Yet it would be Howe's cruel luck that would inadvertently turn out to be his making. The defender’s shortened playing career put him on the path to where he is today, on the brink of becoming a Premier League manager one way or another. Ideally he'd want that opportunity with AFC Bournemouth, of course, the club he's helped transform from fourth-tier relegation fodder to top-flight chasers.

Today, Bournemouth lead a breathtakingly close Championship with five games to go. For a team that six years ago stood on the verge of extinction, Howe's men are daring to dream of the Premier League.

But it wasn't always that way. Having initially been promoted to the role of Bournemouth player-coach before his retirement, Howe fell victim to Kevin Bond's sacking in September 2008, but returned just two months later when replacement Jimmy Quinn was also shown the door. Howe was officially appointed the Cherries' chief in January 2009, taking over a club on the brink of financial ruin.

Money woes had forced the club into a 17-point deduction for the 2008/09 campaign, providing a colossal uphill struggle after relegation from League One (thanks to a 10-point docking for sinking into administration). Bournemouth were reeling off the back of two wins in their last 11 matches when Howe took over, having ceded a potential FA Cup third-round money-spinner by losing to Blyth Spartans.

Despite losing his first two games as caretaker boss, leaving the Cherries 10 points from safety, Howe was hired with a mountain to climb. But Bournemouth lost just two of their next 13 games and steered themselves to comfortable safety, nine points above the doomed Chester City.

The following season he guided the south-coast club to second place in the table and promotion from League Two, rejecting several opportunities to move up the league ladder.

Such was his rising stock, though, that a departure seemed inevitable – and so it came with Championship side Burnley in January 2011. His 21 months at Turf Moor didn't quite turn out to be the exciting challenge foreseen, however. Howe struggled to make any real impact at the club – though he did lure the free-scoring Charlie Austin, plus Danny Ings, Sam Vokes, Kieran Trippier and Ben Mee within nine months – and amid personal troubles, not least the death of his mother, Howe sought a return home.

"There's only one club I would contemplate leaving Burnley for and that's Bournemouth," he declared. "That is the situation we found ourselves in." Suffice to say, he hasn't regretted his decision.

When he returned in October 2012, Bournemouth were struggling, having won just once in their opening 11 games in League One. Attendances at Dean Court were dwindling too – fewer than 5,000 showed up for a home defeat to Walsall in Paul Groves' final home game in charge of the Cherries.

Again, though, Howe waved his magic wand. Bournemouth didn't lose in the league until January 19, and even a five-game losing streak between February and March couldn't stop them storming into the Championship in second place. A first campaign in the second tier since 1989/90 saw the Cherries finish 10th after rallying in the final two months, ending up just six points off the play-offs.

"The best manager I've worked with"

Howe's style has won plaudits from managers and pundits across the country, thanks to a brand of expansive football that's reaped rewards. Bournemouth have fired home a Football League-leading 87 goals thanks to the stellar contributions of Callum Wilson, Matt Ritchie, Brett Pitman and Yann Kermorgant.

But should they end this campaign with promotion, Howe will be the central figure of a perfectly scripted plot. Even as a player his leadership capabilities were clear, and the same is evident of his managerial qualities. Certainly, the 37-year-old is among the most grounded managers around, always keen to ensure that his players understand the need to take each game as it comes.

Under their former player Bournemouth are a team who refuse to be beaten this season, as witnessed in their last two matches. The Cherries were able to snatch a late draw at Ipswich, before coming from two goals down to beat Birmingham 4-2 on Easter Monday. Perhaps those lows as a player are contributing factors to the character of a man who knows how to bounce back from adversity.

Howe’s wisdom goes well beyond his 37 years. He has openly admitted a willingness to learn from others in the game, citing Brendan Rodgers as an inspiration, and is ambitious and composed in equal measure. Those who have experienced his management speak of precise, intricate and detailed methods.

The workaholic element aside, there is also an immense likeability to his character. Kenwyne Jones only signed on loan for the club just over a week ago, but he has already declared that Howe is "the best manager I’ve worked with". The Cardiff City loanee is not alone in his praise.

It would be easy for a naïve outsider to point out that Bournemouth have been able to spend more freely under Russian owner Max Demin, who purchased half of the seaside club back in 2011 before taking full control in 2013, but to suggest that is the sole reason behind their speedy success would be ignorant.

Whether Howe can complete a miraculous turnaround at the Goldsands Stadium remains to be seen. If he can't this season, it'll doubtlessly be questioned how long he'll be willing to wait for his top-flight chance.

Nevertheless, his close links with the club and reluctance to uproot his family mean only a very exciting opportunity would prise him away. Newcastle and West Ham have both been touted as potential suitors.

Back in 2004, Bournemouth fans pledged £13,500 to secure the re-signing of Eddie Howe the centre-back. Is it any wonder he'd be reluctant to leave the club that gave him his first chance, not once, but twice?

"He’s definitely destined for the Premier League, hopefully with Bournemouth," declared Cherries wideman Matt Ritchie, speaking in this month’s FFT. While the latter remains a very possible reality, the statement also suggests an awareness that Howe should not, and probably won't, be held back.

A third rise up the league ladder would cap a remarkable decade for a manager still two-and-a-half years shy of his 40th birthday. Perhaps everything does happen for a reason.