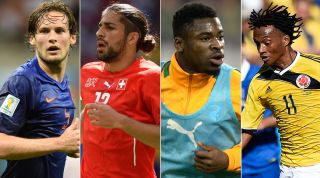 Attacking full-backs always play a significant role in World Cups, and this time around it’s no different. After the first round of group games, just four players have recorded two assists in the competition – and three of them are full-backs.

In fact, the other is something of a converted full-back – Juan Cuadrado has been pushed forward from his old right-back role to become more of a right-winger in the past couple of seasons, although there are suggestions Barcelona want him as Dani Alves’s replacement for next season.

Indeed, it wouldn’t be a surprise to see the other three on the move this summer, either. Holland’s Daley Blind, Ivory Coast’s Serge Aurier and Switzerland’s Ricardo Rodriguez have all been consistently linked with Europe’s top clubs – and their current employers will be pleased they’ve added a couple of million to their price tag already.

Blind was the first player to record two assists. Granted, he was being fielded as a left-wing-back rather than a standard left-back, and therefore had extra licence to dart down the touchline into attack. However, his assists were actually played from extremely deep positions – and were almost identical in nature.

The Netherlands’ strategy was to bypass the Spanish defence as quickly as possible, with through-balls and lofted passes over the back-line. Blind, one of the most tactically intelligent players in the side, understood this perfectly. He received the ball under little pressure (with Spain not playing a proper right-winger) and quickly launched the ball into attack, setting up the Netherlands’ first two goals: Robin van Persie’s brilliant diving header, and Arjen Robben’s cool finish. There were various outstanding performers for Louis van Gaal’s side, but Blind was arguably the best.

The second full-back to register two assists is supposedly Arsenal-bound. Serge Aurier has been widely touted as Arsenal’s next right-back after Bacary Sagna’s departure to Manchester City, and he certainly appears a classic Arsenal full-back – quick, comfortable in possession, and good in the air for a relatively small player.

However, whereas Sagna took a while to develop his crossing ability, Aurier already has that in his locker. He continually got space near the touchline because Japan’s left-sided midfielder Shinji Kagawa showed little interest in marking him tightly, and within the space of three minutes he provided two excellent near-post crosses first for Wilfried Bony, then for Gervinho, as the Ivory Coast came back from 1-0 down to win 2-1.

SEE ALSO Everything you need to know about.... Serge Aurier

Completing the hat-trick of full-back assists was Switzerland’s Ricardo Rodriguez. At Wolfsburg last season he created more goals than any other full-back in Europe, and he has continued his fine form into this World Cup. Rodriguez feels like a turbo-charged version of Leighton Baines, and throughout Switzerland’s 2-1 over Ecuador he continually pushed Antonio Valencia back into his own half and whipped crosses into the middle.

His first assist was from a free-kick for Admir Mehmedi’s header, but Rodriguez is a continual attacking threat in open play, too. The fact his second assist came in stoppage time, teeing up Haris Seferovic for a close-range finish, is a testament to his incredible energy and stamina. Switzerland boast two good full-backs, with Juventus’ Stephane Lichtsteiner on the opposite flank, but Rodriguez was by far the most threatening.

There have been other fine full-back displays, too – Matteo Darmian was superb with his aggressive positioning against Wayne Rooney in Italy’s 2-1 win over England, and Costa Rica’s Christian Gamboa whipped in some superb crosses against Uruguay, including the assist for Joel Campbell’s equaliser.

On the basis of this World Cup so far, England need more from Baines and Glen Johnson if they’re to progress from Group D.