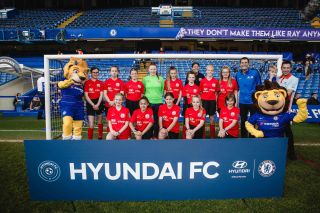 Lionel Messi, Cristiano Ronaldo, Frank Lampard, Eden Hazard. All have graced the playing surface at Stamford Bridge, and 11 junior teams have been given that very same opportunity as part of a new Hyundai initiative.

On a pleasant summer’s day, teams travelled to west London from various locations all across the UK. When they arrived, Chelsea legend Gus Poyet was there to greet them - and even Stamford The Lion, too.

They were invited for the launch of Hyundai FC, a grass roots football programme that will run throughout 2019, as part of the motor company's ‘For The Fans’ campaign.

Hyundai are Chelsea’s global automotive partner and they’ve teamed up with the Premier League club to offer top-level coaching to the 11 participating teams. Each team has an existing collaboration with one of the many Hyundai dealerships around the UK.

Chelsea’s UEFA qualified foundation coaches will travel to each junior club to pass on tips, before each team’s coaches visit the Blues’ training base in Cobham to get an opportunity to learn from the professionals. But first the boys and girls from each team were invited to Stamford Bridge for a stadium tour and an afternoon skills session on the pitch.

“We heard about the Hyundai FC scheme and put our details forward,” explained Sean Fitzpatrick, who works for a Hyundai dealership and is coach of the Barnoldswick Town Juniors under 9s girls team in Lancashire. “Today has been brilliant, just seeing all of their faces. We’ve come down on the train and they were absolutely buzzing for the whole journey.”

The initiative is part of Hyundai's commitment to supporting fans at all levels - including parents unable to attend regular matches at senior level, instead dedicating their time to backing their children in the junior age groups.

Many parents were in attendance for the event at Stamford Bridge - some accompanied the Kilgetty under 13s boys team, from Pembrokeshire. “Our kids are from a rural area - we’re 45 miles from Swansea,” said Gareth Williams, proud father of Tom. “Today they get to see one of the biggest stadiums in the country.”

Poyet, who won the FA Cup and the UEFA Cup Winners’ Cup during four successful years as a Chelsea player, was happy that the initiative brought people together from all over the country.

“People have been saying to me that they’ve driven five-and-a-half hours to get here - I think it’s great that they’ve brought clubs from all over the UK,” he said. “It’s nice for me to be back here at Stamford Bridge, too. When I spoke to the children, I said, ‘Listen to the coaches today, because you can really learn from them’.”

Teams will also receive playing and training kit thanks to the initiative, and Hyundai Motor UK’s marketing director David Pugh was delighted with how the launch day went.

“Some of the kids had an early start this morning, but it doesn’t seem to have slowed them down on the pitch!” he smiled. “It would have been so easy to just do something locally to Chelsea, but we’ve got 160 dealers around the country who are connected to their local communities, so this was a nice way to involve as many people as possible.