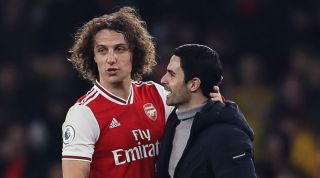 Arsenal are a good example of what happens when a football team improves in a very non-specific way. While anyone watching Mikel Arteta’s side would recognise that they have more heart and spine than the flaccid mess he inherited, that new life can’t yet be described precisely.

Arteta’s arrival threw open the windows at London Colney, allowing the fresh air to rush through its stale corridors. It was one of the areas in which his lack of experience was actually an advantage. Because his style of coaching is yet to acquire any sort of reputation, he came without limitations and with all sorts of unbridled optimism.

If another manager had arrived instead, someone with a CV, a history, and a set of known flaws, then much of the analysis would have been done before that individual had even begun work. His appointment would have been dissected by articles exploring preferred formations and expectations of style and, for all intents and purposes, his chances of success would have been predetermined.

But that couldn't happened with Arteta, because didn't have the kind of substance. Instead, he was little more than a theory and, as such, provided that very rare thing: a truly blank slate.

The 100 greatest Premier League players EVER

There’s recognition of that in the atmosphere around the club. Maybe it’s an illusion, but there seems to be a determination at Arsenal – among the supporters and club-specific journalists – to see the very best in every facet of this situation. It’s a honeymoon period, yes, but it’s more than just that. Because of Arteta’s lack of definition and the subsequent inability to track the side’s progress under him, everything that happens on the pitch might be something – a beginning point, the start of a redemption arc, or whatever else. Essentially: a pertinent moment which is worth paying attention to.

That’s shown in the variety of current plotlines in his team. Some are less likely than others because - clearly - nobody really believed that Granit Xhaka would have a career at the club after what happened against Crystal Palace. Similarly, while it has been necessitated by injuries elsewhere, Shkodran Mustafi’s involvement has for the most part been a pleasant surprise.

The pertinent detail in each case is not that both players are contributing – they’re both experienced internationals after all – but that Emery’s departure relieved them of their reputational baggage. Neither player is likely to be a long-term solution in his position, but the environment has been sanitised in a way which allows them to perform usefully until season’s end.

Which, after all, is the most important aspect of this intermediary period. Arsenal will want to finish as high up the table as possible this season – there are games to win, points to collect and rivals to catch – but its primary use is to inform decisions made next summer. If previously disenfranchised players are able to help the club reach that point in optimal health, then that’s a great bonus. What it shows is that there’s no mood for agendas. Also, that with no specific target in mind and only the broad aim to get better, there’s no real basis for carrying preconceptions, either.

Nobody, however, benefits more than young players do from a philosophical reset. Over time, the appearance of youth has begun to provoke a cynical reaction. Reasonably so, because with some head coaches it can seem gratuitous and like an attempt to curry favour with supporters. Particularly when a team is struggling. What can’t be ignored, though, is that so many youngsters – at all sorts of clubs – appear to thrive under the very conditions which are presently incubating the careers of Bukayo Saka, Eddie Nketiah and Gabriel Martinelli.

The pattern is hard to ignore. Marcus Rashford broke through at Manchester United during a time of desperate attacking poverty under Louis van Gaal and Scott McTominay’s agricultural abilities were welcomed during the dismal spell that followed, under Jose Mourinho. And, at Chelsea, it’s not a coincidence that Frank Lampard’s cohort of academy graduates has thrived, given how acrimonious the relationship between the team and the supporters had become under Maurizio Sarri.

The common denominators are lower expectations and a lack of order. But within lies another, more subtle similarity. Under normal conditions, young players are expected to have a function. If they’re promoted into a side, then they must take another player’s place, improving on his contribution or at least replicating it.

Like the examples above, that isn’t currently true at Arsenal. The nebulous nature of the Arteta project – it’s lack of boundaries, certainties and imperatives - means that there’s no expectation for what somone like Saka or Nketiah should be. In fact, there is no should about it. The same is really true of Martinelli. Interestingly so, because Unai Emery was determined that the Brazilian wasn't a forward and had some unusually fixed ideas about what his future was likely to be.

In all three cases, the respective state of the player seems to suit the conditions at the club. None of them are fully grown, they don't even really have designated full time positions yet, and that creates a natural synergy with a team that - itself - is searching for both an identity and its own fixed form. Much like the manager himself, who continues to draw his own outline day-by-day.

Cumulatively, this describes a state of health. Alignment, even. It's not a permanent situation, because the more Arteta reveals of himself, the more his side will be expected to conform to those ideas. For now, though, in these interim months, Arsenal are characterised by this unusual open mindedness and - unsurprisingly - are all the better for it.

EUROPE 20 Barcelona players you probably forgot ever wore the shirt