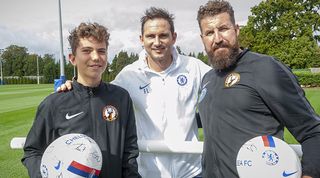 As part of the scheme, local Hyundai dealerships sponsor and offer money-can’t-buy-experiences to 11 boys’ and girls’ teams from around the UK, highlighting their commitment to grassroots football and supporting fans across the country.

In September, one coach from each Hyundai FC team was invited to Chelsea’s training ground in Cobham to learn from the Blues’ UEFA-qualified coaches – giving them invaluable experience and providing expert advice to take back to their relevant teams.

As part of their exciting day, the lucky reps from each club were invited to watch an open training session with the Chelsea senior team, led by Frank Lampard. The coaches then participated in an academy session, where Blues coaches put their youngsters to the test with a variety of top training drills and challenges to develop strength and agility.

The Hyundai FC coaches were also treated to a workshop led by Chelsea Foundation coaches, during which they were tasked with detailing a training plan for their own teams. Chelsea coaches explained how these could benefit their teams and advance their session plans based on learnings from the day.

FourFourTwo spoke to some of the coaches who gained invaluable insight from their day at Chelsea’s training ground to find out what they learned.

“We just wouldn’t normally get the chance to ask questions to people who work in football every day,” said Karlos Miller of Whiteley Wanderers, an under-13s boys team. “Hyundai FC has given something back to grassroots football and we couldn’t be more grateful. As well as the insight from pro coaches, we’ve also had two of our girls be mascots at Chelsea Women. They absolutely loved it.”

“To see pro training set up on a large scale, it makes you wonder what we can do at grassroots to replicate some of those things,” added Patrick Murphy, manager of Anstey Nomads under-13s in Leicestershire. “The way that the pros just move on to the next exercise was seamless. We do some session planning, but seeing it in action and having it written down will be really helpful to structure my own training.”

Gary Hills, manager of Byfleet Vipers under-9s, said: “I’m a Chelsea supporter so it’s a dream come true for me – seeing the first team train was incredible. I’ll take away a lot from it; simple things that can make a big difference. The ball hardly went in the air, for example. I’ve already been trying to use some of the drills that I’ve seen and thought were a great idea.”

The young teams in the Hyundai FC scheme range from U8s to U15s teams. Each team is backed by local Hyundai dealerships – culminating in some unforgettable experiences for over 100 young players and their coaches.

Earlier in 2019, Hyundai launched the Hyundai FC grassroots initiative with a special pitch day at Stamford Bridge in June, during which eager youngsters were given skills sessions and joined by Blues legend Gus Poyet.

Chelsea’s esteemed academy has produced several players fit for its first team in 2019/20, which was demonstrated no better than in their 5-2 win at Wolves in mid-September. All three of their goalscorers that afternoon – Tammy Abraham (three), Fikayo Tomori and Mason Mount – were schooled at Cobham from an early age.

Next up, Chelsea coaches will travel around the country to the 11 Hyundai FC clubs and offer another training workshop experience like no other.

Hyundai UK is committed to supporting fans from grassroots to the elite level. To find out more, visit chelsea.hyundai.co.uk