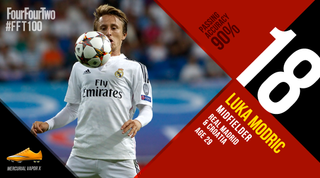 You'll no doubt recall that, just months after joining Real Madrid from Tottenham in the summer of 2012, Luka Modric was named La Liga's biggest transfer flop of the year by Madrid-loopy sports daily, Marca.

What you may have forgotten is that Modric also started slowly at Tottenham - and came in for some more harsh criticism.

One article published in The Guardian three months after his arrival in England went as far as to label him a 'misfit' after his and Tottenham's slow start to the season, citing Arsene Wenger's reported belief that the Croatian was 'too lightweight' for the Premier League.

Given the circumstances, it was no surprise Modric initially struggled in N17. He spent his early days at White Hart Lane as a No.10, before being shifted out onto the left wing to accommodate, of all people, Wilson Palacios. There were flashes of brilliance and the odd sign of of player who could eventually dictate matches, but in general his first year in England was a frustrating one. Both Juande Ramos and Harry Redknapp were seemingly reluctant to throw the wiry 23 year old into a Premier League midfield battle.

Versatility a blessing and a curse

"His versatility was probably a blessing and a curse," Modric's former Spurs team-mate Tom Huddlestone tells FourFourTwo. "He was that good that he had to play out of position for a bit."

To compound his exasperation, Modric was then force to sit out four months of the following season after fracturing a bone in his leg after a roust challenge from Birmingham's Lee Bowyer.

He returned in December, shortly before a chain of events that would ultimately prove highly beneficial for Modric, his team-mate Gareth Bale, Spurs, and later Real Madrid. An injury to left-back Benoit Assou-Ekotto saw the then 'cursed' Bale given a rare run in the first team. Having finally experienced a Premier League victory, the Welsh youngster was kept in the side upon Assou-Ekotto's return, bumped up to left wing. This meant Modric, finally, was entrusted with a central midfield role. He didn't let his seemingly skeptical manager down.

"Every team [Modric] went to, he needed some time to make the players trust him," Slaven Bilic, who worked with Modric during his six years in charge of the Croatian national team, tells FFT. "He doesn't have any attitude like 'OK, I am Modric, now give me the ball!' This is a positive thing because it means all of his team0mates love him; Croatia, Tottenham, Real Madrid - everybody loves him."

The main reason Modric's team-mates love him is that he's always there for them - in a literal sense. Whichever player has possession of the ball at any given moment, he can be certain Modric won't be far away - always presenting himself as an option for a pass, or making a clever movement to create space for the man in possession to exploit.

The fact his industry is so rarely cited is testament to the understated way with which Modric goes about his business. He glides around the pitch with the minimum of fuss, never looking flustered, never looking like the game is passing him by. Although 90% of what Modric does with the ball is pleasingly simple, the rest is dazzling brilliance. He has an uncanny knack of nipping into the tightest of spaces, then nipping back out again with the ball at his feet. His range of passing is almost unrivalled.

Ice cold and calm under pressure

"The main difference between Luka and most other players is his ability to pass the ball with the outside of the boot," says Huddlestone. "He's actually good with both feet, although back then [at Tottenham] he tended to use his right a lot more. The way he manipulated the ball and his first touch - whatever situation he was in - was unbelievable. He's just ice cold and calm under pressure - he manages to get out of any situation and keep the ball."

Dictating play at Tottenham is one thing, running the show at the biggest club in the world is another altogether. After the aforementioned stuttering start in Madrid, Modric's influence on Los Blancos has developed to the extent that it could quire reasonably be argued he was the second most important 'Galactico' after Cristiano Ronaldo. Now Madrid fans sing his name - something that doesn't happen at the Bernabeu for your average playmaker.

When the playmaker made his move from north London to the Spanish capital, some question whether he was worth the £30 million outlay. His relatively sparse numbers when it comes to goals and assists would generally be the root of the argument, but to argue this is to overlook the fact Modric is master of the 'hockey assist' - the pass before the pass. He may have only created two of Ronaldo's bucketload of goals this year, but the seemingly hard-to-please Portuguese forward seems more than a little satisfied with his team-mate's contribution to the cause.

"He is one of our key players," Ronaldo said back in April. "He's showing the best football of his career this season. Not only playing fantastically but to do so continuously, in Spain, for this club is not easy. He is a modest and humble guy. We get on really well."

Although he sometimes looks like he'd struggle to welly a ball hard enough to break a pane of glass, Modric is no weakling.

"He doesn't mind a tackle and if people want to try and kick him," says Huddlestone. "He's quick enough and clever enough to get out of the way. But equally, if he does get kicked, he's happy to take it and get on with it and just keep playing his football."

"He's a player who makes others better," Besiktas boss Bilic adds. "They all benefit from him being in the team. He's not selfish, he's playing for the team.

"In my opinion, he became one of the best players in the world. He's got everything, he's a complete player; good in defence, good in offence - it looks like he was born with the ball at his feet. You'd think he has rear-view mirrors because he can see almost every angle on the pitch."

Ironic, given over the past five years, Modric has barely looked back.