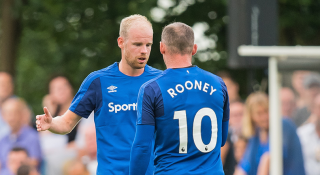 The former Ajax skipper completed a £23.6 million move to Merseyside in June after making more than 180 Eredivisie appearances and winning three league titles.

Klaassen made an immediate impact with a near-post run on his Premier League debut, creating the space for Rooney to head a winner against Stoke.

Asked if their link-up play can prove fruitful for the Toffees, the 24-year-old tells FourFourTwo: “I think so, although of course it has to grow and get better.

“When I signed I didn’t know he’d be signing too – they said they were going to sign a few other players, but not that Wayne was coming. I was back in Holland when I heard. I thought, ‘OK, this is a big player’. He’s a cool guy, easy to be around. It’s good that he has come back to try to get prizes with his old club.”

Read the full interview with Davy Klaassen in the October 2017 issue of FourFourTwo magazine. A new signings special, we also chat to Bernardo Silva about his switch to Manchester City and look at how Romelu Lukaku, Alexandre Lacazette, Alvaro Morata and Mohamed Salah will fare following their big-money transfers to the Premier League. Plus, we reveal the 25 greatest Champions League games ever, meet the FA Cup’s youngest manager who set up a football club following the London riots, recall Derby’s disastrous 2007/08 campaign, go One-on-One with Luis Garcia, learn about the science behind team chemistry and – in the first of a new interview format – hear the incredible story of Rochdale midfielder Joe Thompson, who has battled back from cancer twice. Order a copy today here, and then become a subscriber!