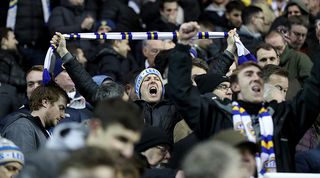 Far from the managerial tenure of Marcelo Bielsa bringing on a new era of calm and hope among us Leeds fans, the angst and horror has never reached such heights.

Sure, we admire his studious chill while we stalk him as he walks to work, drafts and re-drafts meticulous analysis in Costa and sits on his bucket-moulded blue pouffe in the technical area – but it doesn’t change the way we feel. The Fear is very much upon us, grasping us by the throat as we sing Marching On Together marginally off-key.

The reality of being a Fallen Giant™ is that there’s always another fall to be had, and first to third in the final reckoning will be the shortest drop with the hardest thud. I write 'will', I mean 'would'. Would.

Because this is our year, right? Probably, definitely, absolutely not.

No hope is normal

Gut feelings are no longer defined by three victories on the bounce, all with clean sheets. They’re defined by the almost implausible slip-up away at QPR the other week, multiplied by the square of every other horrific defeat of the last 15 years: Hereford, Histon, Doncaster, Sheffield Wednesday. Shudder.

Even with a 3-0 half-time lead at the Madejski on Tuesday, it was impossible to rest; haunted as we all are by memories of being monstered by Jon Parkin and Preston from a similarly un-losable position in 2010. Reading had no monsters of note as it turned out, but we weren’t to know.

We’re so used to having no hope that it’s impossible to conjure it back at this stage. Finishing an approximation of 15th every season can become something of a comfort blanket – it’s the habitat you’re adapted to, making ascent to dizzy heights a scary place. Even if we were to find ourselves six points clear with one game to play, the fear of a last-gasp seven-point EFL deduction under the Ideas Above Your Station Rule, Subsection 191.9 would remain a clear and present danger.

The comfort of despair

With 15th now more or less an impossibility, our new comfort blanket is negativity in the face of positivity, moaning about how not putting seven past Reading was a missed opportunity to improve the goal difference; how Jamie Shackleton will be getting itchy feet if he doesn’t get more minutes; how the players should have no right to be out having a drink and a bit of relaxation at this pivotal point in proceedings. Yeah, that old classic.

So that’s 18 points to play for, starting with Sheffield United on Saturday. We’re absolutely terrible at Yorkshire derbies, if you don’t factor in our win against the same opposition, the double over Rotherham and the victory at Hull this season.

Marcelo Bielsa is the coach of Leeds United. This should be a joy, a re-statement of everything there is to love about football. Yet in a sense, having such a brilliant, modest, humane figurehead at the helm of one of the biggest balls of neuroticism in world sport presents another problem: failure from this point would not only make us sad for ourselves, the city and for anyone who has to put up with our summer of hand-wringing, but perhaps more than all of this, for him.

To be seen as a magnificent, highly-influential failure is a not a fate worthy of the man. There is a glorious, improbable chance for Dirty Leeds to bring some late-career glint to Bielsa’s trophy cabinet.

HE'S BEHIND YOU! The Leeds United pantomime: Bremner as Buttons, Hunter as Prince Charming…

The play-offs are an unthinkable concept. Sure, we’d beat Derby (again), but then, inevitably, Watford 2006 revisited: players going through the motions, a mass of Leeds colours united creating an ocean of desperation and years of conspiracy theories about how the owner didn’t want us to go up anyway, for some unfathomable reason.

Before that brutal day 13 years ago we still, just about, held on to hope. Now it's only dread, and the continual feeling within 48 hours of any game that you need the toilet and want to be sick.

Despite a reputation for thuggishness, the average Leeds fan at the cusp of spring 2019 is more likely to cause damage through the spread of infectious, all-consuming anxiety than a punch to the face. We cannot enjoy ourselves. We will not enjoy ourselves.

It's our duty to go stone-faced towards the finish line, when either the Leeds faithful or absolutely everyone else will have the heartiest of last laughs, at the end of one of the longest teed-up punchlines in the history of dark, surrealist comedy.