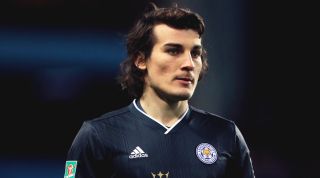 Soyuncu impressed in the heart of the Foxes defence last season alongside Jonny Evans. Brendan Rodgers' side narrowly missed out on a place in the Champions League, with the Turkish international suspended for the final few games of the campaign, following a red card away to Bournemouth in the 4-1 loss.

Having alerted the attention of Arsenal and Manchester City in the past for his ball-playing ability and no-nonsense style, Soyuncu is now apparently on the radar of Barcelona, who are looking to improve their defensive options.

Gerard Pique is now 33, and still Barcelona's best defender. Clement Lenglet has impressed at Camp Nou, but World Cup winner Samuel Umtiti has struggled with injuries in recent seasons. Beyond that, it appears that the club are willing to let Jean-Clair Todibo leave, after a successful loan spell at Schalke.

Barca have been linked heavily with La Masia graduate Eric Garcia in recent weeks, with City manager Pep Guardiola even confirming that his player could well leave Eastlands. Garcia is just 19 though, and Barca are said to want another proven defender for their backline.

Soyuncu has stepped into Harry Maguire's shoes fantastically since Leicester sold Maguire to Manchester United last summer. At 24, he is still yet to hit his prime, and though he came under a little more criticism in the second half of the season, the Barcelona hierarchy are said to be impressed with his profile.

A deal to Manchester City for Soyuncu may have been rumoured all season, but looks to be completely off the cards now, following City's acquisition of Nathan Ake.

It looks like a busy summer for the Catalan club, who are still trying to convince Lionel Messi to stay. Having just purchased Brazilian starlet Gustavo Maia from Sao Paulo - and inserted a nine-figure release clause into his deal - Barca are still said to be on the lookout for another winger. Out of favour Frenchman Ousmane Dembele could well be used as a pawn in negotiations, and talk of a return for Neymar still continue.

Barca retain their interest in Inter Milan's Lautaro Martinez and have been linked with Mohamed Salah in recent weeks. Before the end of the season, the club brought in Miralem Pjanic from Juventus, sending Brazilian midfielder Arthur Melo in the opposite direction.