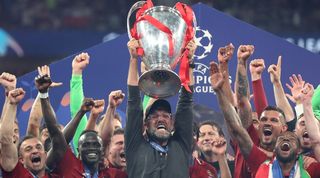 The past decade has been the most turbulent and dramatic in Liverpool’s 127-year history. The Merseysiders have gone from being close to bankruptcy to worth over £1 billion. From relegation-threatened under Roy Hodgson, to Champions of Europe under Jurgen Klopp. From being owned by two men who refused to speak or sit next to each other, to being a model of how to run a football club under Fenway Sports Group.

Rafa Benitez was sacked, Kenny Dalglish returned, Brendan Rodgers became the club’s youngest ever manager, and then FSG surprised everyone by acquiring one of Europe’s top managers in Klopp.

There’s been two Champions League finals, two League Cup finals and one FA Cup final. Two FA Cup semi-finals saw a win over Merseyside rivals Everton and a sorry defeat to Aston Villa - that was soon followed by conceding six goals in a game for the first time in 52 years, against Stoke City.

Anfield – including its new Main Stand, which finally provided a solution to the Reds’ capacity question that had lingered for two decades – has witnessed the incredible comeback against Borussia Dortmund in the Europa League and the even more incredible 4-0 win over Barcelona.

Kopites also witnessed that Steven Gerrard moment against Chelsea and a humbling 3-0 defeat to Real Madrid in 2014 in a game that underlined just how far away they were from Europe’s top tier.

But as 2019 ends and 2020 begins, optimism has rarely been higher among Liverpool supporters. The current Champions of Europe achieved the club’s record ever points total last season and are strong favourites to finally end their 30-year wait for a league title this season – not that anyone of a red persuasion on Merseyside is counting their chickens just yet.

It’s a far cry from the final game of 2010, a 1-0 home defeat to 19th-placed Wolves. Roy Hodgson was finally shown the door the following week after a 3-1 defeat at Blackburn – who sat three places ahead of the Reds in the table.

Fans of other clubs often criticise why Hodgson is viewed so negatively by Liverpool fans, but a large number of supporters wanted him gone long before the New Year, not least after describing a 2-0 Merseyside derby defeat as the best performance of the season, or a win at Bolton as a historic result. Perhaps new owners FSG were actually too kind to give him as long as they did.

It’s Rangers vs Celtic in this season’s first cup final – would victory for Steven Gerrard prove his managerial worth?

It was arguably one of a series of mistakes from the Americans, who have learned on the job since taking over the club from Tom Hicks and George Gillett, via the Royal Bank of Scotland and the High Court, nine months into the decade. Such events add to the rollercoaster of life as a Liverpool supporter in modern times.

But now, FSG have more than stabilised the club since and, indeed, there’s talk of the Reds being “back on their f***ing perch” – a reference to Alex Ferguson’s old comments. Ending the 2010s as officially the best team in the world, the title on offer at the FIFA Club World Cup later this month, would be quite the turnaround for a club who were 23 points off top spot in their own domestic league in the opening season of the decade.

A 19th league title would kick off the new decade in the way Liverpool’s last league title did in 1990, but you can safely bet that the next decade won’t unravel as the nineties did. There’s a new training ground to look forward to next summer, then Anfield’s expansion to 61,000 capacity soon after that.

The 2010s have been dramatic; too dramatic. Liverpool supporters crave the 2020s being a decade return to dominance and reliability.

Here’s our look at Liverpool FC ‘awards’ for the 2010s

Top 3 most significant moments of the decade:

Highlight of the decade: Winning ‘Number 6’

Lowlight of the decade: Gerrard’s slip vs. Chelsea (2014)

ANSWERED What exactly does a club’s 'DNA' mean – and do managers really need it?

QUIZ Can you name the last 50 players to score in Manchester City vs Manchester United games?