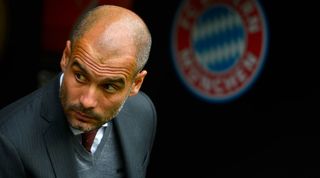 One could forgive the Manchester City groans after they were lumped with Bayern for the third time in the last four Champions League group stage draws.

After all, when the Premier League champions faced their German counterparts at the same stage last season, they were beaten 3-1 and completely outclassed to the point that their opponents were applauded off at the Etihad Stadium.

No team before or since has humbled City on their own patch quite like Pep Guardiola’s men did in October – but this time you can be sure there’ll be no admiring ovation if there’s a repeat.

After four seasons of underachievement in the fight for ol’ Big Ears, City fans won’t accept another.

In at the deep end

Manuel Pellegrini’s side could hardly have begun this season’s campaign in more daunting fashion, but perhaps their early Allianz Arena trip might not be such a bad thing. After all, Bayern themselves are adjusting to Pep Guardiola’s experimentation this season.

With a combination of injuries and new arrivals, the Bavarians are a different side this time out. Over the summer, Guardiola attempted to implement his long-admired 3-5-2 with mixed success – results were patchy, and Die Roten were soundly beaten by Borussia Dortmund in the Supercup, while last season they were trounced 3-0 by RB Salzburg in a winter-break friendly.

Nevertheless, they remain all-conquering juggernauts of the Bundesliga, even if early-season displays have hardly been exceptional. On Saturday they saw off Stuttgart 2-0 at the Allianz, but were occasionally unconvincing until Franck Ribery put the game beyond doubt with five minutes remaining.

Unlike Louis van Gaal, however, Guardiola has persisted with his three-man defence despite plenty of reasons not to. It didn’t help, for example, that Javi Martinez – who would have acted as the hub of his manager’s new-look rearguard – damaged knee ligaments in August and won’t return until mid-February. Or that after more than 18 months on the sidelines, poor old Holger Badstuber was forced off before half-time at the weekend and requires surgery on torn muscle tendons.

You're a wizard, Xabi

For that there’s new signing Mehdi Benatia, who will now make his debut here. For Martinez, meanwhile, there’s Xabi Alonso, who perhaps wouldn’t have joined Pep’s Bayern revolution had his compatriot not suffered another frustrating setback.

But Lord knows they need him right now. Knee-knacked Bastian Schweinsteiger hasn’t been seen since canoodling with the World Cup trophy in Berlin, Thiago Alcantara is also sidelined for the foreseeable future and skipper Philipp Lahm is back in his natural habitat as a busy full-back.

Guardiola began the season staffing the heart of his midfield with David Alaba and academy graduate Gianluca Gaudino – neither of whom performed badly, it should be noted – but Alonso’s arrival has provided the former Barça boss with a player capable of settling things down when it matters on a weekly basis.

Against Stuttgart the Spaniard was heavily involved, making a whopping 126 passes and covering the most ground of any player. No wonder he felt it. "It was a lot of effort," he puffed post-match. "Of course we controlled the game, but until we got the first goal there were a few minutes which were not so good."

Guardiola, however, has his reservations. "With Xabi, we have improved a lot in the building game," he said. "He has the eye for the short pass, for the long pass, he is intelligent in defensive behaviour. But he is 32. We have to support him during the game. If he does everything, he will be dead in a month."

Naturally, Bayern will be expected to dominate possession against City. At the Etihad last season they commanded a huge 66% of the ball, and a similar level of patience may be required from Pellegrini’s mob this time. Bayern have hit that figure in both of their last two league matches with Alonso in the team, compared with a more modest 59.8% against Wolfsburg without the Spaniard.

Yaya Toure will likely be entrusted with making life difficult for the former Liverpool man, though a collective effort will be needed to throw a spanner in Guardiola’s passing machine. At the Etihad they were guilty of allowing the Germans to rack up an astonishing 611 passes at 89% success, with nine of their outfield players heading the top passers list. If City don’t press, as was the case then, they’re almost certain to hit trouble.

Then there’s those wingers. Last year Ribery and Arjen Robben were sensational in pinning back Gael Clichy and Micah Richards, and it was no surprise that both scored from their combined 11 attempts. They were happy to go direct and put the frighteners up City’s back four with dribbling (green stars indicate successful take-ons) in dangerous areas.

It's likely that neither of them will start in this game, though. Robben missed his second game in a row on Saturday, while Ribery’s goalscoring cameo was only 20 minutes long in his first competitive game since mid-May. "I’m not at 100% yet," the Frenchman admitted. "I’ve been working hard but training and matches are very different things. Now I need to find my rhythm again."

Pep has alternatives. Mario Gotze impressed against Stuttgart as he rekindled his old chemistry with Robert Lewandowski, though he could plump for the more explosive Xherdan Shaqiri or push Alaba forward.

It's the little man from Memmingen who's likely to get the nod again, but the 22-year-old will need to adapt fast. Gotze’s versatility across the forward line means he’s rarely deployed in the same position game by game, and unless he works well with former Dortmund team-mate Lewandowski it’s possible that both players could become isolated. Bayern need his link-up play.

On the other side of the forward trio is Thomas Muller, a player who should need no introduction yet seemingly remains one of world football’s biggest mysteries. "I understand that many find it hard to get me as a player," he told The Guardian in a recent interview. "They say: 'Impossible, how did he do that?' But, at some point, they maybe start thinking: 'Oh, he’s quite good after all.'"

Certainly, there are few players better at being in the right place at the right time. "I always knew I’d have no chance against a 1.90m, 90kg defender in a duel," he continued, "so the key is to avoid these situations altogether." English clubs haven’t found the knack of keeping the 25-year-old out – he's netted in six of his 13 appearances against Premier League outfits, including four in his seven outings against City and Arsenal.

Like Gotze, Muller’s play is fluid, though he will more often act as a second striker rather than a playmaker for Lewandowski. Against Stuttgart he was largely deployed out wide, but regularly moved inside and registered more efforts than any other player (4). Fernandinho will need to keep a close eye on his inward movements, but Vincent Kompany and Martin Demichelis must pay particularly close attention to his ghosting runs when Bayern break.

Ultimately, City have to upset the hosts’ rhythm as much as possible. Bayern might not yet be the force of recent years, but their willing group of pass-happy stars are slowly breathing life into Pep’s new system; they're also desperate to win the competition this year.

City, meanwhile, have already twice demonstrated an ability to beat the German giants – albeit that the chips were off the table on both occasions. No one is suggesting they must do it again, but walking away with heads held high will be important for Pellegrini on a night where his men can’t afford to lie down.

They’ve already embarrassed themselves twice (Carlos Tevez did that thing too, remember?). Not again. Both Vincent Kompany and James Milner have declared City will show no fear – now's the time to prove it.