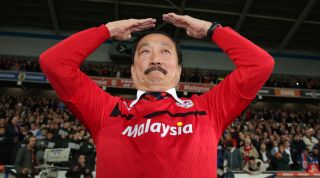 A former work experience kid has been appointed new head of recruitment by the football club that used to be Cardiff City.

Alisher Apsalyamov spent the summer painting walls at the Cardiff City Stadium, home of the former Cardiff City, before being catapulted into his new role. The inexperienced Kazakhstani will be expected to identify and analyse prospective signings, and persuade them to move to where Cardiff City used to be.

“The former Cardiff City is a great institution, with a history stretching back hundreds of days,” said the 23-year-old, who went to finishing school with the son of Vincent Tan, chairman of the club formerly known as Cardiff City.

“You can feel how important tradition is here,” Apsalyamov continued. “It’s hard to believe that when I took my first tentative steps in the world of football, three long months ago, the football team that currently plays in Cardiff had already existed for nearly a year.”

Apsalyamov replaces the suspended Iain Moody, a close confidante of manager Malky Mackay. The two had previously worked together at Watford, and Cardiff City, when Cardiff City still existed. Mackay’s position has come under intense scrutiny following the removal of his ally, but he has refused to entertain talk of resignation.

“I started a project with Cardiff City, and I’m intending to see that project through,” Mackay told FourFourTwo.com. “Even though the money I spent may not be real, the man who hired me wants me gone, and the club I signed for no longer exists.”

A football club masquerading under the name Cardiff City are next in action on 19 October, when they will play the team that for the last 10 years has been Chelsea.