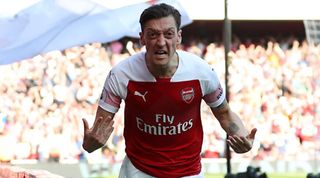 Once again, Mesut Ozil was left out of an Arsenal matchday squad by Unai Emery. Not dropped to the bench. Left out.

Last season Emery would drop hints as to why the playmaker wasn't always part of his plans. The Spaniard said he would be used sparingly in away games, and when explaining why he had been dropped for a game against Bournemouth, declared that Ozil couldn't cope with their "physicality and intensity". With the greatest respect to Bournemouth, that's a fairly damning statement.

Twelve months on, with the Cherries coming to the Emirates, and Emery still isn't convinced that Ozil is up for the fight.

It's been strange watching the war of attrition between Arsenal's manager and the club's highest earner take place over the past couple of seasons. I don't think there are many Arsenal fans who'll say Ozil's time in north London has been an unqualified success, but some of his treatment by the new regime has been... well, yes, a bit odd.

That he was named as one of Emery's five captains seemed to indicate he'd be an important figure in the side, but pointed substitutions against Crystal Palace, Wolves and Brighton in the first half of the season suggested something wasn't right.

The nadir of their relationship came in the Europa League final, when Ozil was replaced by Joe Willock in the 78th minute with Arsenal already losing 4-1. At that point, most Arsenal fans would have assumed that the German wouldn't play for the club again, but the summer came and went, he stayed, and again was named as one of Arsenal's five captains.

But he's only played twice this season - the 2-2 draw against Watford, and the 5-0 win over Nottingham Forest. He was subbed in both with 20 minutes to go.

There would surely be more sympathy for Emery's position about Ozil were the alternative any clearer.

Arsenal aren't in bad shape attacking-wise, but much of that is down to Pierre-Emerick Aubameyang bailing out average team performances with exceptional finishing.

Statistically, Arsenal do lose something when Ozil is out of the team. Last season he averaged over 46 passes per game, with an accuracy of 88.6%, and also made 1.9 key passes per game. Across the first eight matches of the season, nobody in Emery's plans is currently matching those numbers.

There is an argument that Emery is trying to move Arsenal away from being a team that strangles opponents through possession towards one that is brutally efficient on the counter, and that Ozil is a casualty of that style change. The signing of Nicolas Pepe and faith shown in Bukayo Saka seem to point to that.

However, it's this style that has been partly blamed for Arsenal's defensive profligacy; the amount of goals they're conceding and shots they're giving up to the opposition - despite Emery predominantly playing with two holding midfielders in the middle.

It's funny to think now, but when Ozil signed there were concerns that his passing ability would be wasted on the attackers Arsenal had in their squad. Strikers like Olivier Giroud, Theo Walcott, Yaya Sanogo and Lukas Podolski weren't seen as being ruthless enough to get on the end of the chances he would inevitably create.

Now, Arsenal are blessed with maybe the best forward line they've had since the departure of Robin van Persie in 2012; quick, attacking players who can make runs in behind, hold up the ball, finish well and frighten defences.

Surely there's space in that No.10 role for Ozil to do some damage this season. At the very least, it's worth having him on the bench.