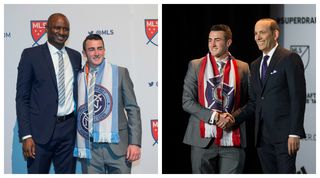 The Major League Soccer SuperDraft – depending on who you ask – is either an anachronism destined to be abolished in short order, or a worthwhile way to introduce young talent into the league in a fair and judicious manner.

The two groups are not remotely similar in size. The draft does not split fans down the middle, with half of them condoning abolition while the other half argues for continuing the process. The draft stopped being a crucial part of the MLS team-building process some years ago, and the only group that seems to back it as an important at all is the league leaders themselves. MLS commissioner Don Garber is a big fan of the draft. College kids holding up jerseys and decked out in team scarves makes for quality photo ops.

To be fair, there might be some older MLS fans who still view the draft with a certain amount of twisted affection. The history of the event does go back to the beginnings of the league itself, after all, and some of the best players ever to lace up a pair of boots for many an MLS club arrived because of it. At a time when MLS clubs had neither the resources nor the will to train their own young players, the draft helped spread the wealth of the college game into the burgeoning professional league.

It also helps that American sports just do drafts. Since the earliest days of that most American of professional athletic endeavours, the NFL, drafts have existed to move the best college players into the professional ranks with an eye towards competitive balance.

By giving the worst teams from the previous season first pick of the crop of incoming players, the NFL ensured that one or two teams didn’t come to dominate the competition through greater financial means. Bad teams had a chance to get better, meaning fans across the country could imagine their team becoming good enough to win a championship without much effort.

Of course, the draft also served to depress salaries. With the rights to each player controlled by just one team, there was no chance of a bidding war between clubs for an incoming player’s services. More than anything, that was the genius of the draft; collusion by the owners to make sure no college player could drive up wages by playing teams off of one another.

American sports have always – no matter the competitive juices that flow between the opening of the season and the crowning of a champion – been about the big picture and the bottom line. Leagues are both competitive environments and collective businesses, operating in all of the confounding ways those two identifications imply.

In other words, the draft was not created with the player’s best interest in mind.

The draft remains important and relevant to the NFL because there is only one league playing gridiron football on that level, and the college version of the game remains the only developer of new talent. That’s true, in large part, because the teams themselves never needed to establish their own academy systems. No outside competitors means no threat to the talent supply, which meant no impetus to create an alternative to American college football.

Football of the other kind is much different. MLS originally created their version of a draft for the same reasons the NFL has used it for so long – namely, distribution of talent in nominally equitable fashion and control of wages.

In the beginning, MLS clubs had no academies of their own and the greatest supplier of new (American) talent was college soccer. It hardly mattered that MLS was just one league in a world of hundreds because it didn’t yet have designs on full participation in the global player market. As long as American players of a certain age needed a place to turn professional, MLS was ready with the draft to decide their fates.

Times have changed. Every MLS club has an academy now, and the league is actively encouraging its teams to bring through graduates as part of an initiative to develop more players in-house. College soccer’s host of limitations, and Major League Soccer’s desire to integrate itself into the buy-and-sell madness of soccer around the world, means the impact of the college player is on a precipitous decline.

Clubs no longer want to tie their futures to the possibility that a 21-year old moving into the professional game for the first time will be great, and MLS hasn’t helped the available talent pool by taking many players out of it with the academy system (many players who progress through MLS academies do end up playing soccer in college, but MLS rules allows them to sign with their home clubs once their college experience is over).

All of this adds up to an event that is much more pomp and circumstance than meaningful exercise in talent acquisition. Last week’s draft delivered the requisite selections, but it also included a raft of trades that might say something about the value of the players procured through it.

Beyond any notions of diminishing returns, the draft itself, and the convoluted back-and-forth trading it inspires, only leaves fans grasping for a shred of understanding. MLS rules are extremely complicated, individual selection slots (not to mention players once selected) are tradeable, and the future will be built on the back of players raised in academies, not college.

Take last week, for example: Chicago Fire’s No.1 pick Jack Harrison won’t actually play for last season’s worst team, having quickly been traded to New York City for the fourth pick and general allocation money (which is attributed to transfer fees and salaries). The Colorado Rapids gave up their No.2 pick to Philadelphia Union in exchange for general allocation money and a player.

It all makes for a system, and an event, that doesn’t have much to do with the real world.

Still, it’s the one MLS-focused event in the middle of a long winter. Fans still take note, even if they are keenly aware that most of the players involved won’t amount to much at the professional level because the draft is a milepost on the way to the start of the new season.

And there’s talent – even if it’s a much thinner group than ever before. Every year the draft manages to deliver one or two very good players into the MLS ranks.

Does that mean it needs to continue, though? Probably not, but as long as MLS thinks it’s a worthwhile event from PR perspective, the draft will probably continue, a relic of a different time carried forward into a world that no longer understands it.