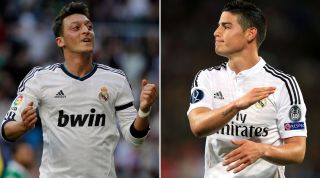 It’s Wednesday. And La Liga Loca doesn’t like Wednesdays. Mainly because it wakes up thinking it is Thursday, which it also doesn’t like very much either.

But it does mean that it's a fine day for channelling all that gloom by peeing on someone’s parade. Normally Barcelona or Real Madrid receive a gentle shower, which is a perfectly healthy hobby for anyone, so let’s not break with tradition.

Seeing as the Catalan club are busier in the courts than on the pitch these days, LLL is going to keep its beady focus on Real Madrid and correct some of the unfortunate enthusiasm it may have shown towards them on Tuesday ahead of the European Super Cup clash with Sevilla.

To be fair, it wasn't as much rampant joy as the Madridista press displayed with its frothing over the wondrous-but-hideously-costly Madrid forward line. At times it was like a showbiz reporter gushing over Jennifer Lawrence heading down a red carpet, with the actress sporting a plum-sized necklace containing the whole of New Zealand (“4.4 million deaths and the destruction of the Hobbit village, but look how it shines!”).

The day after the Super Cup win, most pundits didn't know where to turn in the glory making. Among the themes pondered were the return of Cristiano Ronaldo, the torso of Gareth Bale, the quality of players that didn't make it onto the pitch, and Iker Casillas not making any comedy howlers.

“Madridistas are now dreaming of the Big Six!” claimed Tomás Roncero in AS, a challenge that could fall flat when a fist-throwing Atlético Madrid take care of the Spanish Super Cup in a week’s time.

Basically, the blog isn’t buying the hype, simply because we've been here too many times - from the Galactico Reboot of 2009 when 85,000 turned up to see Ronaldo waving, to last season and the arrival of Gareth Bale and Isco, which apparently saw the greatest forward line ever assembled (until Mesut Özil quite rightly left in a huff).

But even LLL's inner misery-guts will admit that Real Madrid could be a fun team to watch, especially for the amount of goals they are going to concede and Luka Modric and Toni Kroos shoot each other “well, it was your turn to track back” looks.

Although it may U-turn in a few weeks' time, the blog still fancies the more balanced XI from José Mourinho’s league title-winning season of 2011/12, which wasn't a huge distance from winning the Champions League either.

Sami Khedira and Xabi Alonso were a fine partnership in the centre of the park, Ronaldo (in his true pomp) and Angel di María were balanced on the wings, Özil was the unselfish playmaker while Karim Benzema and Gonzalo Higuaín added competition and variety up front. Even Pepe was less of a loon than normal.

However, Carlo Ancelotti clearly knows his football stuff more than LLL so trusts that its opinion may be changed soon. While Madrid were impressive in parts on Tuesday in Cardiff, the side still has a long way to get a true nod of appreciation from this grumpy direction. After all, it is Wednesday.