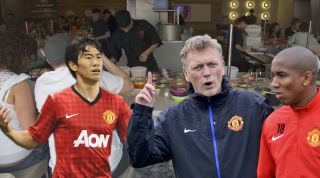 Moyes and his Manchester United players decamped on Wednesday night to Umezushi on Mirabel Street in an attempt to rebuild morale after their Champions League defeat to Olympiakos.

But the evening took an uncomfortable turn when Moyes consistently ignored Kagawa’s attempts to explain the various exotic foodstuffs on offer, instead asking England winger Young for his thoughts on the relative merits of inarizushi and gunkanmaki.

“It was really awkward,” a Manchester United player, speaking on condition of anonymity, told FourFourTwo. “Shinji’s mid-way through explaining that the negitoromaki might be a better bet than the funazushi on account of the latter being made with fermented carp, when the gaffer turns his back on him and asks Ashley for his thoughts on natto maki.

“When Ashley says he doesn’t know what natto maki is, we all assume he’s going to listen to Shinji. But instead he asks Antonio [Valencia] what namasu means. Antonio does his best, but they didn’t teach him that at Wigan.

“The situation’s crying out for Shinji, but the boss just asks Juan Mata the difference between maguro and otoro, which isn’t fair on Juan, especially since he’d told him that we were all going for tapas.

“In the end, he just gives the menu to Tom Cleverley and asks him to come up with the goods. Is it really a surprise that everyone ends up with a massive bowl of wasabi and a California roll?”

The evening took a turn for the worse when Robin van Persie complained that everywhere he wanted to sit was already occupied by someone else, and deteriorated even further after an argument about the bill saw Moyes threaten the restaurant staff with an endless barrage of slow, looping crosses.