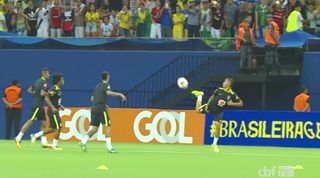 As Brazil's players were preparing for their 2018 World Cup qualifier against Ecuador on Saturday, Neymar and Gabriel Jesus scrapped the stretching for something more fun instead.

The crowd wasn't disappointed as the PSG forward and rising Manchester City star went on a spontaneous keepy-uppy marathon from one length of the pitch to the other. Neither player allowed the ball to drop once, until the talented duo made it to the opposite box with a variety of tricks and flicks.

You can hardly blame them – Brazil had already qualified for the World Cup before even kicking a ball in their 2-0 win, courtesy of goals from Paulinho and Philippe Coutinho.