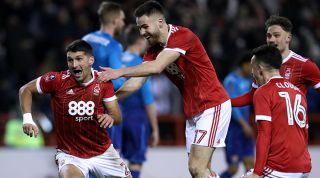 Lichaj scored twice in Nottingham Forest's shock 4-2 win over Arsenal in the FA Cup on Sunday, and after the game revealed that his wife had promised him a dog if he scored a hat-trick this season.

So near, yet so far for the American – or so it seemed.

The 29-year-old tweeted his followers asking if they could send dog-related GIFs and memes to his wife, Kathryn. Sure enough, his Forest team-mates Kieran Dowell, Ben Brereton, Zach Clough, Joe Worrall and Matty Cash – among many others – obliged.

A bemused Mrs. Lichaj had only returned to England from a holiday with her daughters and brother on the day of the game, and watched replays of Eric's goals on a runway at East Midlands Airport.

"I landed on the runway and put my phone on and had loads of calls," she told the Nottingham Post. "Matt Mills's wife left me a voicemail. I thought what's happened? With people leaving voicemails I thought it must have been bad. There were pictures of dogs on Twitter and Facebook.

"I've never seen him score two goals before. I was buzzing for him but really upset because I get to all the games and the one I missed he scored two."

So, after yet more persuasion from her two-goal hero husband, Kathryn finally relented and got her husband the four-legged friend he craved. She tweeted: "Ok guys, you and @EricLichaj win! I said we will look into it... please no more pictures of dogs!!"

The couple have now welcomed 'Gunner' (of course) into the Lichaj household. Happy days.